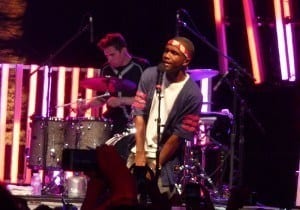 American singer-songwriter Frank Ocean recently opened up this week about his sexuality through a letter he wrote on his Tumblr page.

In the letter, Frank Ocean opened up about his first love a few years back, “4 summers ago, I met somebody, I was 19 years old. He was too. We spent that summer, and the summer after, together…Sleep I would often share with him. By the time I realized I was in love it was malignant. It was hopeless. There was no escaping, no negotiating with the feeling. No choice. It was my first love, it changed my life.”

The letter written does not, in fact, disclose the singer’s sexual orientation.

Despite the presumptions the hip-hop community has on gays, many have been supportive of Frank Ocean. Odd Future member, Tyler, the Creator, tweeted, “My big brother finally f—ing did that. Proud of that n—a cause I know that s—t is difficult or whatever. Anyway. I’m a toilet.”

Russell Simmons, Def Jam Records co-founder, viewed Ocean coming out as a game changer and compliments his actions. Simmons wrote, “Today is a big day for hip-hop. It is a day that will define who we really are. How compassionate will we be? How loving can we be? How inclusive are we? I am profoundly moved by the courage and honesty of Frank Ocean. Your decision to go public about your sexual orientation gives hope and light to so many young people still living in fear.”

There has been apparent change in the hip-hop community. Just recently after Obama endorsed gay marriage, rappers Jay-Z, Ice Cube, T.I., and Bun B have shown their support for gay marriage. Rapper Lil’ B released an album last summer called I’m Gay—not intending to point out ‘gay’ as a sexual orientation.

“It’s just respect, and I did that to bring people together and bring more love and to spark the minds of people and not let words and judgments and stereotypes stop you from loving,” Lil’ B said.

Earlier this week, another notable who came out was Anderson Cooper.

Frank Ocean is best known for his popular song Novacane and Thinking About You. Ocean has appeared on tracks with artists Kanye, Jay-Z in No Church in the Wild and with Tyler, the Creator in She. Frank Ocean’s highly anticipated album Channel Orange is set to drop July 17.