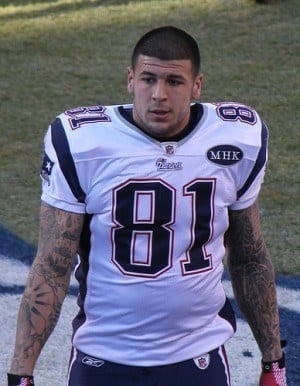 Aaron Hernandez has pleaded not guilty to first degree murder of Odin Lloyd’s back on June 17. Lloyd was found dead in an industrial park in North Attleborough, Mass., near Hernandez home.

As the investigation continues, Hernandez was believed to have been at the scene of the crime the night Lloyd was murdered but further evidence is still pending. In recent developments, Hernandez’s fiancée, Shayanna Jenkins, 24, was indicted for perjury.  She becomes the third person to be indicted for Lloyd’s murder.

Jenkins allegedly concealed information about her contact with Hernandez, carrying out requests given by Hernandez himself.

According to police investigations, records show an exchange of phone calls and messages between Jenkins and Hernandez within days of the murder. Hernandez asked Jenkins to remove firearms from their Massachusetts home and dispose of them. Surveillance cameras show Jenkins leaving her home with a black bag and later returning without the bag suspected to have been Hernandez’s firearms.

Jenkins’ uncle told investigators that they were handed cell phones and told to discard the weapons into the woods.

As the pieces of Lloyd’s murder come together, many suspects are being indicted just as Jenkins has. Hernandez is currently being held without bail as he awaits further hearings.