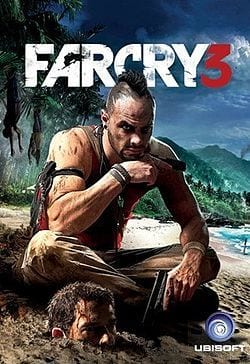 Imagine a taking a vacation to a deserted island with some of your closest friends. Nobody to call the police with noise complaints, no worrying about a designated driver, and absolute seclusion from all the worries of the world. Now imagine that island isn’t deserted at all; in fact, your group is abducted by pirates with the intention of holding you for ransom. That’s precisely the predicament that Jason Brody, protagonist of Far Cry 3’s story faces. He, his two brothers, and two female companions are nabbed during what should be a relaxing getaway to a tropical paradise. Instead, Mr. Brody is forced to fight for his life against ruthless natives and deadly animals in an attempt to save his friends and himself from imprisonment, slavery, or worse.

The world itself is sprawling, featuring dozens of events both scripted and random. And while players are free to roam the countryside at their own pace, it will be done blindly until you scale the radio towers scattered around the island. Each tower opens up visibility of an area on your map, showing points of interest, items to collect, and which animals are apt to be prowling the wilderness. With the animals and enemies teeming throughout every area, the island seems itself a living organism; the towers are no different. In a dilapidated state, the towers sway back and forth, groaning and creaking with each step the player takes. To scale the towers is no simple task and as you work your way from one to another their difficulty increases. Stairs, ladders, fallen planks, ropes, and other debris litter your path in an attempt to slow your progress. Make it to the top and you’re rewarded with a new section of map unlocked and a brilliant zip-line ride back down to the ground.

The animals, both predator and prey, litter the landscape and react similarly to their real-life counterparts. Goats, pigs, deer, and other docile creatures flee from you, while bears, tigers, komodo dragons and even sharks will hunt you down and snack on your hind quarters. It’s not as if players can avoid the animals, either. Early on players are have limited carrying space for money, items, guns, even ammo. By hunting down particular animals and skinning them, players can create larger weapon holsters, bigger wallets, or larger rucksacks that increase maximum capacity. Additionally, while prancing around the island players will also find plants, categorized into colors of blue, white, crimson, and green. Each plant is used in a specific recipe to craft syringes that can increase hunting, tracking, damage, resistance, or even heal. By seeking out animals and plants, a layer of progression is added that allows players to experience something other than the inherent violence of all shooters.

Unexplained is the reason how a typical American kid, thrust into a life-or-death situation, can suddenly take on the skills of a trained killer and fight off hundreds of people who know how to handle weapons. Jason Brody somehow obtains a supernatural tattoo (called ‘tatau’ by the indigenous people) that allows him to increase his own fighting skills. The experience he gains isn’t of supernatural quality; better gun control, stealthier movement, and other things are gained that lend a sort of realistic approach to the players skill progression. Which is why a ‘magical tattoo’ feels so out of place. Experience (XP) is gained anytime you dispatch an enemy, what changes is the amount of XP. By taking a stealth approach and quietly ridding the area of enemies, players can gain XP an at alarming rate. If a run-and-gun approach is more your style it can certainly be done, but with far less of a reward.

With any story unique characters are introduced, and Far Cry 3 is no exception. In fact, some of the most interesting characters of this generation reside on the island. The problem is that they’re cast aside so soon after introduction that players aren’t given an opportunity to increase their relationship. A drug addicted doctor, an underground CIA agent, and the female leader of the rebels are all magnificently designed but aren’t given any personal moments or lengthy interactions to give the player a sense of attachment. Even as you attempt to save the group of people you came to the island with, there’s no connection, nothing pulling you to want to save them except experiencing more fantastic gameplay.

And it is fantastic, on all accounts. Weapons feel markedly different from others, vehicles provide yet another layer of enjoyment, putting players in the air, on the ground, and over water with multiple options. Random, unscripted events are some of the most satisfying things to witness. For instance, as you trek across the island and retake enemy outposts (there are 36 in total), occasionally you’ll find an animal caged up. Instead of having to infiltrate the outpost, you can simply shoot the cage and free the animal. Often a tiger or a bear, now looking for revenge, will storm through the camp mauling enemy after enemy and leaving only one or two for you to finish off. It’s this sort of player improvisation that makes Far Cry 3 a wonderful gameplay experience.

Co-op and multiplayer is also included, both suffering from the same pro’s and con’s of the single player. The guns feel as if they have a certain ‘weight’ to them, lending a realistic quality to firing at your foes. The lobby system of multiplayer is an issue that cannot be overlooked. Instead of creating your party of three or four friends and finding a game, players are forced to first search for a game, then invite their friends. After that there’s still no guarantee you’ll be playing on the same team. For a game that hits on gameplay so well, it’s fantastically disturbing that having the option to play with my friends from the get-go is absent.

Having a free-roam shooter with role-playing aspects and seeing it set on a beautiful island is a recipe for success. Far Cry 3 hits on nearly every option they instituted, with one exception. Characters, skills, story, and side-missions are extremely superficial. Had more time been spent developing the characters, adding a deeper hunting and crafting system, and more explanation during the story, Far Cry 3 would be in the argument for one of the greatest games of all-time. Instead, with the wondrous gameplay and 30+ hours of story, it will have to settle for one of the best of 2012.