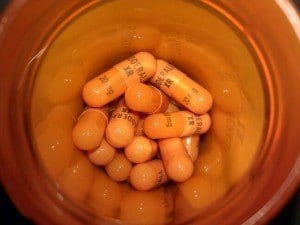 ADHD drugs that are being sold online are most likely fake, according to the US Food and Drug Administration.

One of the main ADHD drugs in question is Adderall, which is used to treat both ADHD and narcolepsy.

ADHD drugs, which are notoriously known to be misused by college students to stay focused on schoolwork or to study, like Adderall have gained popularity in recent years due to increases in prescriptions.

More than 18 million subscriptions to Adderall were written in 2010, according to IMS Health.

However, when those wanting ADHD drugs cannot obtain a prescription, they may turn to the online market as a seemingly easy fix for an immediate need.

What these hopeful consumers may not realize is they are being duped with fake ADHD drugs.

Spotting the differences between imposter drugs and actual ADHD drugs is not as difficult as it may seem. The fake ADHD drugs are white and without any markings, while the real drug is a peach or orange in color and have the markings “dp” and “30” (in reference to the dosage) written on them. The fake ADHD drugs may have misspellings on them as well.

Denise Bradley, a spokeswoman for Adderall maker Teva Pharmaceutical Industries, told The Philadelphia Inquirer they are working on the issue of the peddling of fake ADHD drugs and warns consumers of even more tip-offs.

“We have reported to the FDA and continue to work with them on the investigation. We were alerted by a consumer who noticed misspellings on the fake product packaging. Our product is packaged in bottles,” she said. “These fake product are packaged in foil wrappers.”

Adderall and other ADHD drugs are classified as an addictive substance, and therefore is subject to federal regulation.