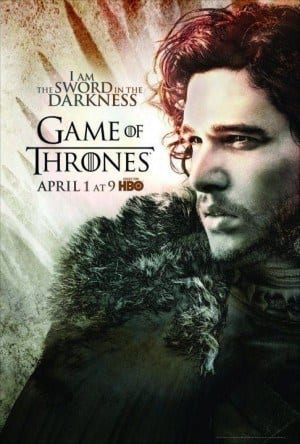 In Game of Thrones Season 5, Episode 5, “Kill the Boy” the stakes for each side are raised, and new conflicts are introduced as characters make difficult decisions for the people they lead. My favorite parts of this episode of Game of Thrones include the sweet conversation between Grey Worm and Missandei and the scenes with Sansa and the awful Bolton family in Winterfell.

Queen Daenerys: Sorting Out Class Tensions in the City

After the battle with the Sons of Harpy, Grey Worm is severely injured but survives. Unfortunately, Daenerys’ remaining knight, Ser Barristan Selmy, dies from his wounds. I was sad about the passing of the old knight. He wasn’t with Dany for as long as Jorah was, but I always felt that Ser Selmy always had good intentions for his queen.

Daenerys orders all the leaders of Meereen’s great families to be brought before her, even her noble adviser, Hizdahr zo Loraq. She gathers them all in The Dungeon and feeds one of the leaders to her two chained dragons. Yikes. At first I thought that she must have really hated that guy, but later it looks like she just chose that guy at random. He was the Unlucky One.

Later, reassured by Missandei about her problem-solving abilities, Daenerys visits Hizdahr in his dungeon cell and informs him that the gladiator pits will be opened–but only for free gladiators, and to make peace with the people of Meereen, she will marry him. The camera leaves us watching him watch Dany leave. I don’t see his face so I’m projecting my own awe and mindfuckery into whatever I think Hizdahr must be feeling.

Brienne and Podrick: The North Remembers

Brienne distrusts Little Finger and the Boltons. She doesn’t believe that Sansa will be safe. In this episode, Brienne and Podrick are marginal characters – Brienne wants to save Sansa but there’s not much that they can do. However, peasants of Winterfell are still loyal to the Starks. Brienne sends a secret message to Sansa, directing the young Stark to light a candle in Winterfell’s highest tower if she is ever in trouble.

I could hear the bitterness in Brienne’s voice as she recounted her old life as a plain-faced noble lady, the awful experience with those noble men, and how it must have pained her father. She also reveals why she was so loyal to King Renly: he had saved her dignity in the face of humiliation.

Long before George R. R. Martin’s Game of Thrones series was made into a TV show, Gwendolyn Christie was already cast by fans for the role of Brienne. The six-foot-three Gwendolyn Christie has done an amazing job portraying Brienne.

Theon: A Glimmer of Hope?

With all the camera closeups featuring Theon in the foreground while Ramsay Bolton talks to Sansa Stark, I find myself searching for a glimmer of rebellion within his twitchy countenance. Sometimes he looks as if he might betray Ramsay for the sake of his old adoptive sister, but Theon is long gone, and I’m reading too much into his anxious ticks. Theon’s fear is on behalf of his own wellbeing, not that of Sansa. Pre-broken Theon had never been the selfless sort, and he was not about to change in this episode.

I couldn’t help but feel disappointed with Theon when he goes whimpering to Ramsay that Sansa had seen him in the dog kennels–and also disappointed with myself for hoping for something different. He is completely broken.

Boltons: Father and Son Bonding Over Moments of Cruelty

As always, the Boltons leave me in that uncomfortable spot between cheering (when Lord Roose Bolton recognizes Ramsay as his son) and cringing (at how the father and son take what they want by the most brutal means possible).

Roose tells his son the story of how Ramsay’s mother had married “without my permission”, so he hung her husband and raped her under his hanging body. About a year later, she shows up at his castle with a baby claiming that it was his. Roose was going to have her whipped but then he saw the baby and recognized the child as his son. 10% heartwarming, 90% awful.

Ramsay is to marry Sansa Stark to secure his family’s claims to the North (and Winterfell). He initially sets out to flatter his future wife, but since Theon confessed that she had seen him in the dog kennel, Ramsay starts to release his nasty side during dinner with the family by arranging for Theon to marry her off during the wedding. Lord Roose, in response, reveals that his wife is pregnant with their son. Observing Ramsay’s look of dismay, Sansa smirks. Ahh, the beginning of a beautiful relationship.

Having been ushered into leadership by Sam and his big mouth, Jon Snow now must make some unpopular decisions in order to make sure that the Wildling women, elders, and children make it south of the wall before the White Walkers come. He must “kill the boy” to reveal the man that he is to become.

Jon frees Tormund Giantsbane (or, the Guy with the Epic Beard) and offers to let the Wildlings live south of the Wall in exchange for an alliance with the Nights Watch. Tormund agrees, but only if Jon accompanies him to North to convince his people to come with them. Props to Tormund for negotiating power…One day I would like to negotiate as well as he does. Jon requests Stannis’s fleet to transport the Wildling folk.

Due to the Wall’s dwindling supplies, King Stannis makes arrangements to march for Winterfell in the morning. Ser Davos is worried about Stannis’s wife and daughter, but Stannis doesn’t trust the Nights Watch men, a large percentage who he knows are criminals, including rapists. It’s sweet how Ser Davos cares for Shireen’s safety.

Stannis bumps into Sam in the library and asks him about his research of the White Walkers’ weaknesses. Stannis recognizes that the pudgy sam is no warrior, but appreciates his scholarly skills and tells him to keep reading. I read somewhere that one of the traits of a good leader is to recognize the strengths of your subordinates, so Stannis gets an A+ in leadership today.

Tyrion and Jorah: The Duo

Gotta love this duo. Jorah is taking Tyrion to “the Queen”. Tyrion, with his hands tied together, talks incessantly while Jorah solemnly rows the little boat. They cross the ruins of Valyriam, and spot one of Dany’s dragons fly overhead. Then stone people attack, which I think is an awesome concept. Tyrion nearly drowns but is saved by Jorah. However, Jorah has been “touched” by the stone folk, as we can see the leathery skin on his inner forearm. He must get to his beloved Queen soon, but he is a walking stonebomb…

+0 The creepy relationship between Ramsay and his peasant lover. At first I thought she’d be scared of boring him, but she seems to enjoy the thrill of sexing a dangerous man. This explains her unhappy face from episode 3 when Sansa Stark enters Winterfell.
+5 Sansa Stark’s face capturing both disgust and pity at the sight of Theon cowering in the dirt beside the dog kennels
+1 Great beard for the new wildling leader. I’ve always liked his beard.
+2 The old peasant woman: “The North remembers.” Ned Stark left a legacy of decent treatment of his peasants, and years later, people still remember his leadership with respect.
+1 The son prompting his father for that baseball-and-mitt talk? Oh my.
+2 Sweet moment between Grey Worm and Missandei, in which he says he felt fear that he would never see her again. They make a cute couple.
+1 Tyrion + Jorah make an interesting duo, with Tyrion’s playful (and occasionally biting) sarcasm clashing with Jorah’s earnest solemnness.