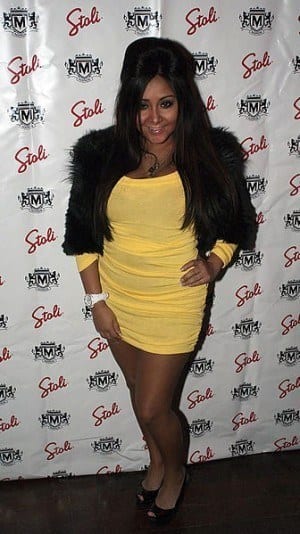 What to expect when Snooki is expecting

Yes, it’s true, Nicole—Snooki to most of the world—Polizzi is approximately three months along in her pregnancy. The father is presumably long-time boyfriend Jionni LaValle. While Snooki denied pregnancy rumors earlier this month, the “Jersey Shore” star is reportedly expecting, according to the “New York Post.”

Snooki and “Jersey Shore” co-star Jenni “JWoww” Farley had plans for a “Jersey Shore” spinoff show on MTV. However Snooki, known for her partying habits, will most likely be taking a break from nights out at the clubs and day-drinking on the beaches of New Jersey. So, the expected child may be throwing a wrench in MTV’s plans before he or she even makes it out of the gate.

“I’m not pregnant. Does this mean I’m getting fat again? Where did this come from,” Snooki said earlier this month in reference to questions about a possible pregnancy.

Despite her apparent outrage at the accusation, Snooki was pregnant and reportedly denied earlier rumors because she “didn’t want to jinx it” according to TMZ.

Now, rumors are flying that Snooki is hoping to reap the benefits of pregnancy as only a minor celebrity can do. It makes sense that Snooki would want to put her name on everything from baby clothes to toys, since she has made her fortune with not much else but a name, a hairstyle and a reputation for partying.

According to the Post, Snooki is hoping to rebrand herself as the new “celebrity mommy” and has already sold her pregnancy news to various weekly celebrity gossip magazines.

So can we expect the spawn of Snooki to come out with a faux tan and a pouf 12 inches high? Andm will pregnancy play a role into Snooki and JWoww’s new reality show “Snooki and JWow versus the World”?

Pregnancy wasn’t in the plans, so it will be interesting to find out how MTV can twist it into the plotlines.

As for the pouf, we will just have to wait and see.