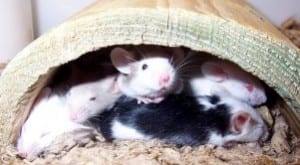 What does this mean for humans?

New research in mice suggests that mitochondria are dysfunctional early on in Alzheimer’s disease. It has been discovered that Alzheimer’s disease triggers a protein that contributes to the breakdown of the brain causing memory loss.

Researchers have managed to reduce the protein substance in mice with drugs.   Johannes Graff, a postdoctoral researcher at Massachusetts Institute of Technology said, “We can show that this is potentially reversible.”

Although a human trial is far down the road, the success with Alzheimer’s disease in mice is promising. Graff went on to comment though, that the drug, should it be developed, would simply treat the symptoms of Alzheimer’s disease but not attack the root cause.

The new research suggests that the protein HDAC2 becomes triggered by Alzheimer’s, the brains memory become affected. The trials were a success in preventing the buildup of HDAC2 in mice and preventing memory loss. What could this mean for humans?

Dr. Brad Dickerson, an associate professor of neurology at Harvard Medical School commented on the success of the study,
“This is a very early basic science study in mice and requires substantial additional investigation in order to determine whether it is worth pursuing in patients,” he continued, “The leap from animal studies to human clinical trials is a big one and always takes many years. Drugs in this class are being studied in various types of cancer, which hopefully will provide an indication of their side effects and other important information about how feasible it would be to give these types of medications to patients with Alzheimer’s disease if further studies support the potential value of this approach.”

It is estimated by the U.S. National Institute of Neurological Disorders and Stroke, who funded the study; that more than 5 million people are suffering from Alzheimer’s in the United States.

Previous ArticleBranson, Missouri in state of emergencyNext ArticleUS soccer team ousts Italians on their own turf