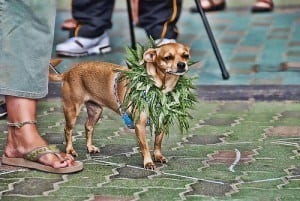 National Weed day upon us once again

420 is a big day for stoners around the country and though one might think they will lazily be getting high all day, there is a great number who prefer to use 420 as a day to raise awareness about marijuana in hopes that the drug can be legalized and regulated just like alcohol.

420 is also a day where 10,000 students and non-students gather on the Norlin Quadrangle at the University of Colorado-Boulder every year, light up at 4:20, and then leave. A university spokesman Bronson Hilliard said of the event, “We don’t consider this a protest. We consider this people smoking pot in the sunshine. This is a gathering of people engaging in an illegal activity.” The Huffington Post reported that the group doesn’t play music and they don’t cause a ruckus but the University still doesn’t want to be associated with the activity. To combat this years 420 pot gathering, the University is taking measures to deter it from happening, including applying a fish-based fertilizer, which carries a pungent odor, around the quad. A university spokesman said, “This is not about the war on drugs. It isn’t even about marijuana per se. Ten thousand to 12,000 (people) doing anything in the academic heart of the campus would be a problem.”

Where did the term “420” come from? Although there is an urban legend that the police code for marijuana use in-progress was 420, it most likely came from four friends from San Rafael High School in California in 1971. After hearing rumors about an abandoned crop, the friends, known as the Waldos, decided to go search for the crop, agreeing to meet after practice everyday at 4:20, and reminding each other throughout the day about what time to meet. Although they never found the free bud, the friends kept using the term “420” as a code. One friend told the Huffington Post, “I could say to one of my friends, I’d go, 420, and it was telepathic. He would know if I was saying, ‘Hey, do you wanna go smoke some?’ Or, ‘Do you have any?’ Or, ‘Are you stoned right now?’ It was kinda of telepathic just from the way you said it. Our teachers didn’t know what we were talking about. Our parents didn’t’ know what we were talking about.” They four friends have proof, showing a tie-dyed flag with 420 stitched into it that they made in high school, and numerous letters to each other from high school using the 420 reference. Evidence of the 420 code cannot be traced further than 1971.