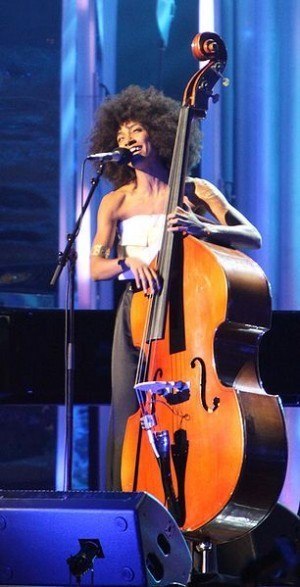 Esperanza Spalding gave a stirring performance of Louis Armstrong’s “What a Wonderful World” at the Academy Awards “In Memorium” tribute.

As Esperanza Spalding sang a beautiful rendition of the song, the names and faces of Hollywood legends were projected in black and white on a screen behind her.

Last year Esperanza Spalding won Best New Artist Grammy, making her the first jazz artist to win the award. She was also named Jazz Artist of the Year at the Boston Music Awards in 2011. Despite these awards, she has remained mostly under the radar.

Spalding grew up in Portland Oregon and was raised by a single mother. She has quite a diverse ethnic background, as her mother is Welsh, Hispanic and Native American and her father is black. The musician draws on many genres when composing her own music and is able to sing in English, Spanish and Portuguese.

The singer and bassist names her mother as a powerful influence and says that she always encouraged her musical expansion. Esperanza Spalding taught herself to play violin by the time she was 5. She attributes this drive to cellist Yo-Yo Ma, whom she saw perform on “Mister Rogers’ Neighborhood.”

Spalding began playing up bass at age 14. She played with Chamber Music Society of Oregon until she was 15. She dropped out of high school at age 16 and completed her GED. She then enrolled in the music program and Portland State University, but ultimately decided to apply instead to Berklee college of music, where she received a full scholarship. Almost immediately upon graduation she hired by Berklee, making her one of the institution’s youngest professors in history.

Esperanza Spalding has recorded three studio albums, “Junjo,” “Esperanza” and “Chamber Music Society.” She has plans to release her next album, “Radio Music Society,” in March.