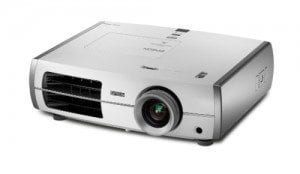 Putting the ‘home’ back in home theater

Owning a projector used to be reserved for people with home theaters and stadium seating, but with the advancements in both technology and imaging, Epson makes owning a projector practical. The typical environment has gradually shifted from impressive home theater to home and dorm use; in a world where we’re constantly trying to make more space, having a projector helps us reach that goal. Granted, there are still issues to overcome and the everlasting debate of OLED or LCD versus projector still rages, but advancements in technology are constantly swinging the pendulum back and forth to determine what’s best for consumers.

The Epson Powerlite Home Cinema 8350 is a hardware leviathan, weighing 16.1 lbs, and measuring 17.7″ by 15.5″ by 5.7″, large by projector standards; with all of that real-estate, you’d expect that it handles itself with power and grace. You’d be right, of course. The bulb itself is good for up to 4,000 hours — that’s almost 170 days of straight television watching. While you’re spending five and a half months in front of the 100” screen, you’ll be enjoying it in 1080p high-definition. You may be asking yourself why would you want a 100” screen? The real question is: why wouldn’t you?

The multiple uses also lend a feeling of versatility to the device, due to its seven inputs. Two HDMI, component, composite, S-video, VGA, and an RS-232C serial port allow for watching movies, playing games, using it as a PC monitor or implementing it during your teaching endeavors. The biggest issue is the lack of on-board audio, but it’s an issue that is inherent in most projectors industry wide. Besides, adding audio to the projector would increase the size of what is already a hulk of a device. To compensate for the absence of speakers a 3.5mm audio-out port allows for connection to a surround sound system or an audio bar.

The setup is quick and easy, requiring only access to a plug and a level surface to place the projector on. Once there, simple adjustments to the bottom feet allow you to ensure your picture is level and evenly distributed on whatever surface you’re projecting on. Typically you’d want to use a projector screen or a custom-painted wall made using projector paint. For those unable or unwilling to go that extra step, the projector works surprisingly well on simple wall paint regardless of color. Tested in multiple rooms, each with different paint shades, the device held up well, beaming an image with minimal picture tinting and minor glare. That’s mostly due to the E-TORL 200w UHE lamp and the 2,000 lumens of white and color brightness that is projected. For those not versed in the technical specifications of televisions and monitors, suffice to say it’s very bright, holds colors extremely well, and projects an image with sparkling clarity.

Ultimately, the benefits of the device far outweigh the disadvantages. You need a little distance between the projector and the surface you’re projecting on and the distance needs to be clear of obstructions to avoid shadows. The absence of on-board audio can also be frustrating, but most consumers looking into a projector expect this issue and plan accordingly. With a screen up to 100” diagonally, beautiful HD picture on most surfaces, and an impressive lamp, anybody looking to create a theater experience would be hard-pressed to find a projector that does what Epson has accomplished with their Home Cinema 8350. Even in situations where low-light isn’t an option, the picture is still easily seen.

The debate will constantly rage, pitting projectors versus OLED/LCD televisions in a winner-take-all deathmatch, but if companies like Epson continue to engineer high-end hardware like the Powerlite Home Cinema 8350, the battle will last far longer than their competitors hope. Retailing around $1,299.00 you can expect to get service on par with that of a fixed screen. Having an HD experience at 100” is tough to accomplish at that price though, and if you’re looking for a theater experience in all facets of entertainment without leaving your home, look no further than Epson.