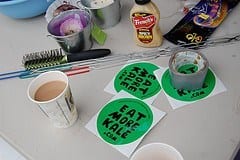 Vermont folk artist Bo Muller-Moore is attempting to expand his home business, dependant on the phrase “eat more kale”, but is facing what he calls and “assault” by Chick-fil-A, says The Christian Science Monitor.

In 2000, Bo Muller-Moore received a request by a kale-farming friend of his to lend his silk-screening skills to make three “eat more kale” for his family.  He took a liking to the phrase, calling it “an expression of the benefits of local agriculture,” as kale grows well in Vermont and is known for its nutritional value.  Now, eatmorekale.com features the phrase on bumper stickers as well as customizable t-shirts and hooded sweatshirts.

For the past five years, Muller-Moore has been receiving letters from Chick-fil-A of a cease-and-desist nature, claiming “eat more kale” is too similar to their “eat mor chikin.”
On Oct. 4, a letter ordered Muller-Moore to discontinue his use of the phrase, as well as turn over eatmorekale.com to Chick-fli-A.  But the 38-year-old Montpelier resident refuses to do so.

Chick-fil-A owns the trademark to the phrase “eat mor chikin”, but Muller-Moore doesn’t see how “Eat More Kale” is stepping on any toes. The application he filed last summer with the U.S. Patent and Trademark Office to protect “eat more kale” is pending.

Montpelier lawyer Daniel Richardson says “At the end of the day, I don’t think anyone will step forward and say they bought an ‘eat more kale’ shirt thinking it was a Chick-fil-A product.”

Visit eatmorekale.com to sign a petition to help stand up for small businesses.