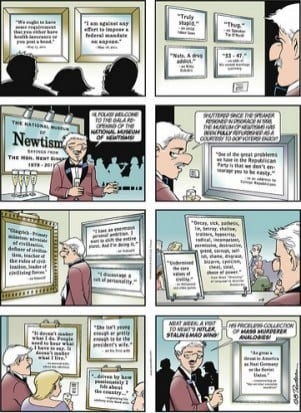 Doonesbury this week will not just be another “funny” in the local newspaper, and depending on where you live, it simply might not be there. Doonesbury will feature a series of six strips that will comment on the right-wing abortion policies, namely, the policy that women who seek to have an abortion must first undergo a “transvaginal scan,” or ultrasound, before undergoing any procedure.

Doonesbury debuted the first of the six strips that will appear this week.  Made of four panels, each panel involves two characters, a woman patient and a woman secretary. The patient asks if she is in the right place to get a sonogram.  The secretary continues by asking the patient if this is her first pregnancy termination and then hands her a clipboard and tells her to fill it out in the “shaming room.”  Confused, the patient asks, “In the what?” as she holds the clipboard with the Scarlet Letter “A” on it and the secretary replies, “A middle-aged, male state legislator will be with you in a moment.”

Doonesbury creator Garry Trudeau is known for using his comic strip to express political issues, but the upcoming strips are being taken out of a number of local newspapers who feel the language of Doonesbury is too graphic for its young readers or that the content is too much of a sensitive subject.

The sonogram law, which had gone into effect early this year in Texas, requires that all women who seek to terminate their pregnancy must first have a sonogram. During the sonogram, it is required that the doctor explain the procedure, play sounds of the fetus’ heartbeat, show images of the fetus and explain and describe the images of the sonogram.  Apparently, women are allowed to decline to hear the heartbeat or see the images but must listen to the doctor’s descriptions of the exam.  The “logic” behind the law is that women, after seeing and hearing their pregnancy will think twice about an abortion.

The upcoming Doonesbury comics have been reported to get more “graphic” or “over the top” and are the reason why so many papers are refusing to print it.  Lines from the next comics have been reported. and one line, which has caused some of the most controversy, is explained by Doonesbury creator Garry Trudeau.  Before inserting the probe necessary to perform a sonogram, the doctor tells the patient, “By the authority invested in me by the GOP base, I thee rape.”  Trudeau explains, “Texas’s HB-15 isn’t hard to explain: The bill says that in order for a woman to obtain a perfectly legal medical procedure, she is first compelled by law to endure a vaginal probe with a hard, plastic 10-inch wand.  The World Health Organization defines rape as ‘physically forced or otherwise coerced penetration- even if slight- of the vulva or anus, using a penis, other body parts or an object.’ You tell me the difference.”

A new Doonesbury comic will be printed every day until Saturday with this theme, and if they aren’t in the local newspaper, plenty of blogs have promised to put them up.