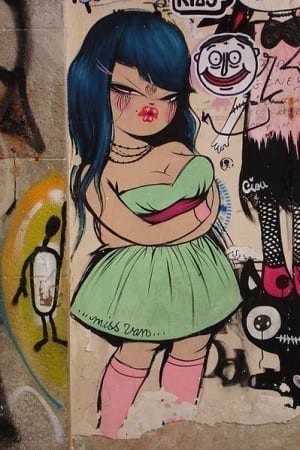 The real kicker to the story is Choe initially laughed at the idea of the social network and chose to accept stock options rather than cash. Now, with Facebook planning their first IPO, David Choe could be looking at a payout of over $200 million. This is almost double of what “The Gunniess Book of World Records” had apprised the Mona Lisa for back in 1962.

Ironically, the Korean-descent artist spent much of his younger years on welfare. When the LA riots happened in 1992, he set a van on fire with his brother, and his parent’s store was also burnt down the same day.

Facebooks CEO and mastermind, Mark Zuckerberg, also asked Choe to paint the company’s second office in 2007. Art from the original headquarters has since been removed and is displayed throughout Facebook’s offices worldwide.

Choe, the art school dropout, who has a painting of his depicting Barack Obama hanging in the White House, has also done art work for musical acts like Jay-Z and Linkin Park.

With an art style clearly influenced and honed through years of painting graffiti on billboards and brick walls, Choe on his website writes, “He is currently homeless, wondering the earth, making good art and bad music.” While it’s clear that David Choe’s art is “good,” he may have to think about changing the homeless part.

Choe is currently in the process of painting Facebook’s Menlo Park office.