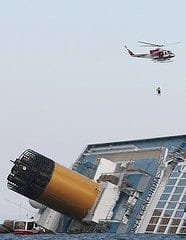 Captain was arrested on Saturday for abandoning ship

At a conference in Genoa, Italy on Monday, the head of Costa Cruises claimed that Captain Francesco Schettino’s “actions caused the disaster,” reports the Chicago Tribune.

Chief executive Pier Luigi Fosch went on to reject the idea that the ship’s size was what made it difficult to evacuate the 4,000 passengers safely.  “These ships are ultra-safe. It is an exceptional event, which was unforeseeable,” Foschi said while fighting back tears.

Fosch continued to defend his vessel but not his Captain, saying, “we need to acknowledge the facts and we cannot deny human error.”

Schettino was arrested on Saturday, accused of manslaughter and abandoning the ship before all of the people were evacuated. When rescue operations were suspended on Monday morning, 16 people were still unaccounted for.

Schettino has claimed the ship hit rocks that were not marked on maps or detected by navigation systems, while Foschi says the ship deviated from the predetermined route due to a poor decision by Schettino.

The 114,500-tonne ship, called Costa Concordia, capsized on Friday night and now lies on its side near the port of Giglio off the Tuscan coast.  At least six people have died.

Read more about the incident here.