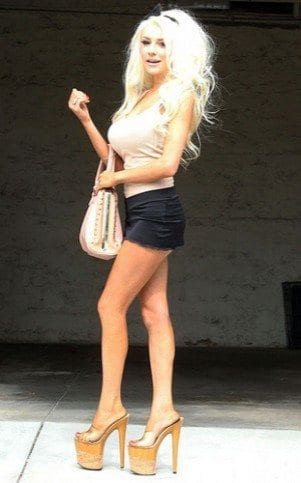 Courtney Stodden is one of those gross tumors inside of pop culture, that is only there for reassurance that the world surely will be ending and if it is not, then it should. Kind of like Octomom or John and Kate Plus 8. The 19-year-old is most famous for marrying actor Doug Hutchinson when he was 51 and when she was 16. She has gone on to make appearance on different reality TV shows, including VH1’s Couples Therapy. Well, I guess the therapy didn’t work because the couple who has been together for two years has gone on to sign a separation agreement.

The separation agreement was never constructed in federal courts, but rather written up by their entertainment attorney, Cervantes Entertainment Law. In the agreement Courtney Stodden and Doug Hutchinson will live as if they were never married, but in a weird turn of events they will continue to live in the same house.

The reason for this separation is partly due to Courtney Stodden’s obsession with getting plastic surgery and alternating her appearance to look faker than a blow-up doll. In an interview with E!News she went on to explain that her constant need to change her appearance was seen as a negative in her husbands eyes. This makes sense considering not every guy wants to sleep with a walking sex doll. “That’s actually one aspect of our relationship where we fought so much,” she revealed. “He did not want me to, for instance, get hair extensions. He fought me tooth and nail, he’s like, ‘I do not want you to get hair extensions.’”

If this is the case then Hutchinson defintely wasn’t impressed by the recent DD breast implants that Courtney Stodden just had put inside of her. Stodden pranced around while on Couples Therapy in small bra tops and skirts that resembled belts, which left a bad taste of some of the other cast members’ mouths. After being asked to dress a little more modestly, she refused which ultimately resulted in her being kicked off the show.

Of course, an opportunist like Courtney Stodden will be using this opportunity to gain more reality fame, with reports that she will be starring in a reality show where she attempts to find love is in the works.