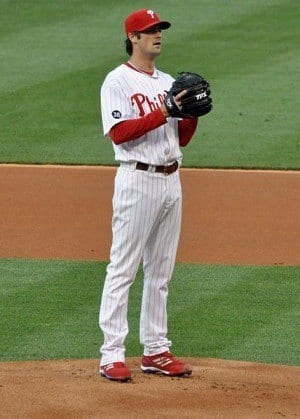 Cole Hamels admits he hit Bryce Harper with a 93 mph fastball on purpose.

“I was trying to hit him,” Phillies pitcher Cole Hamels said. “I’m not going to deny it.” Hamels nailed the rookie phenomenon in the small of his back his first time up during the Phillies 9-3 win Sunday.

Why, you ask? “That’s something I grew up watching, that’s kind of what happened. So I’m just trying to continue the old baseball because I think some people are kind of getting away from it. I remember when I was a rookie the strike zone was really, really small and you didn’t say anything because that’s the way baseball is,” Cole Hamels said.

“But I think unfortunately the league’s protecting certain players and making it not that old-school, prestigious way of baseball,” he said.

In other words, Hamels said, “It’s just, `Welcome to the big leagues.'”

Cole Hamels maintains he was not attempting to injure Harper. “I think they understood the message and they threw it right back,” he said. Nationals Jordan Zimemrman hit Hamels with a pitch in the third, but he denied it was intentional.

Will Cole Hamels get in trouble, you ask? The pitcher may face suspension from Major League Baseball, but that decision has yet to be made.

In 2009, Chicago’s Bobby Jenks admitted to throwing at Texas’ Ian Kinsler. Jenks was not suspended, but he was fined $750. In 2008, White Sox manager Ozzie Guillen was suspended two games for saying he had ordered pitchers to intentionally hit batters.