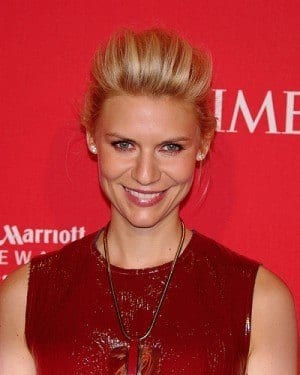 At one moment point, Claire Danes was a former “It girl” who seemed to be tail-spinning around the time of Terminator 3: Rise of the Machines. Since 2010 however, she has been raking in every single award that she has been nominated for.

Claire Danes will be gracing the cover of next month’s Vogue magazine. She will be featured alongside her Homeland co-star and fellow Emmy winner Damian Lewis, in anticipation for the Homeland season premiere.

In the Vogue interview Claire Danes discusses her trials and tribulations in the acting game:

“I always have the fear that I won’t be able to do it, because I am convinced that it left me and I don’t know how I managed it before. You just hold out for those rare moments when you feel a real fusion with this imagined person. It’s really like surfing. You get that wave and think, All right, I can be in freezing-cold water at 5:00 a.m. in the hopes that I will get one. And maybe you get three of those a year.”

“It was confusing. I got a lot of plaudits, and it didn’t translate into more work. I was really, really struggling during that time…. It was grim. I was very hurt. Two years of not working was brutal. And a point came where I thought, I really like interior design. Someone suggested, ‘Maybe your real success is in your personal life.'”

It’s probably unthinkable for Homeland fans that Claire Danes may have even considered a career in interior design over taking the role of Carrie Mathison. She questioned taking the Homeland role:

“Do I want to play this toxic person for that long?” After having looked at the script Claire Danes decided that she couldn’t pass the opportunity up. “I was scared of it, and I thought, OK, right, that means I have to do it.”

You can see the full interview with Claire Danes in August’s edition of Vogue. Homeland returns to Showtime Sunday September 29.