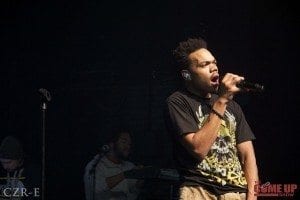 This past weekend, a bunch of bands and artists came together in New York for the music festival Governors Ball. Everybody from Jack White to Andre 3000 were in attendance performing, mingling, and talking to reporters.

One of the many stories that came out from the weekend is the announcement that Childish Gambino, better known as comedian/actor Donald Glover, and Chicago born Chance the Rapper are teaming up for an EP.

The two have collaborated in the past in “Favorite Song” off Chance’s last release Acid Rap and also on “They Don’t Like Me” on Gambino’s album Royalty. Most recently they both were featured on “The Worst Guys” where we only hear Chance say a couple words on the chorus. At Governors Ball, Chance finally performed his verse that was supposed to be on the song, which led to Gambino hinting at a possible future collaboration.

The next day, Gambino went to twitter to confirm things even further.

“Now that chance finally released his verse on ‘worst guys’, maybe he can hurry up and finish the rest of our EP #hinthint.”

There is not a concrete release date for the EP so we will have to wait and see. Both Chance and Gambino also have their own projects due to come out soon as well.