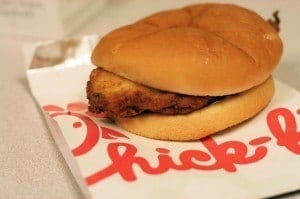 After flocks of people came out to show their support for Chick-fil-A during yesterday’s Chick-fil-A Appreciation Day, those against the company will also come out tomorrow in boycott of the company’s moral beliefs.

Chick-fil-A has recently been under extreme scrutiny after their CEO made anti-gay comments in an interview. In his interview that started the controversy, Chick-fil-A CEO Dan Cathy said he supports the biblical definition of the family unit and that gay marriage is arrogant.

Now, gay rights advocates, gay marriage supporters and those against the fast-food chain’s moral stance will be coming out on Friday to local Chick-fil-A s across the country as part of a same-sex kissing protest and in part of GLAAD’s efforts to create “Same-Sex Kiss Day”

The gay rights supporters have also pushed for a boycott of Chick-fil-A and are now pushing for new Chick-fil-A outlets be blocked and current ones be shut down. High-profile people have come out of the woodwork to show their disapproval against Chick-fil-A, including the mayors of Boston and Chicago.

The people opposing Chick-fil-A plan to have a kiss-in at the various restaurants across the country.

Others say the moral stance of Chick-fil-A has nothing to do with their business, and they will continue to eat at the chain because they enjoy the food.

Despite the Chick-fil-A protests yesterday, business was extremely high for the chicken company. The chain owns more than 1,600 restaurants.