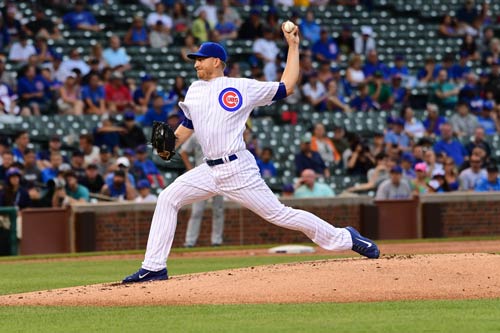 Major League baseball team, the Chicago Cubs, won the championship title last night for the first time in 108 years. The win came in against the Cleveland Indians after 10 innings and a close final score of 8-7. After an agonizing 17-minute delay during the game caused by the rain, the Cubs did not disappoint when they ran back onto the field where pitcher Mike Montgomery got the final out. Cleveland had been playing to win the crown since their last championship win since 1948.

The curse is lifted

Fans have half-joked about the “curse of the billy goat” finally being lifted from the team as they celebrated this monumental win.

“The curse of the billy goat” story story that alleges the owner of the Billy Goat Tavern, Billy Sanis, was kicked out of a Chicago Cubs game in 1945 after the foul odour of his pet goat was disturbing surrounded fans. Appalled and outraged, Billy cursed the Cubs, promising they would never win a world series game again.

The last time the Chicago Cubs were crowned champions in the world series was way back in 1908 where they beat the Detroit Tigers 4-1.

Chicago Cubs’ first baseman, Anthony Rizzo, is reported to have said, “Chicago, it happened. We did it, we’re world champions.” The team’s fans gathered outside Wrigley Field in Chicago in huge celebration of this monumental win.

Among the team’s diehard fans included Presidential candidate, Hillary Clinton who watched the game via an aide’s iPad in Arizona while Amy Schumer and Bill Murray were actually present at the game.

President Barack Obama took to twitter to congratulate the winning team, inviting them to the White House in celebration. His tweet said: “It happened: @Cubs win World Series. That’s change even this South Sider can believe in. Want to come to the White House before I leave?”

A congratulatory tweet also heralded from space station, NASA, who honored the champions with a photo of Chicago taken from space.