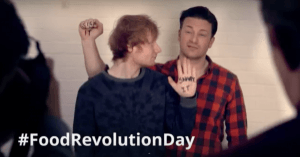 Ed Sheeran and Jamie Oliver teamed up for a good cause, Food Revolution Day.

It’s a petition and campaign organized by Oliver who is pushing for new food education in schools across the world. Oliver hopes his message will inspire governments to take action to educate kids about food and making healthier choices that translate to healthier lifestyles for the long haul.

“We’re currently facing a global obesity epidemic, with 42 million children under the age of five either overweight or obese across the world,” Oliver noted in his petition. “The bottom line is the next generation will live shorter lives than their parents if nothing is done to rectify these alarming stats.”

“Ed just came in to do a little bit of filming for me to support Food Revolution Day,” said Oliver. “I start telling him a few things, writing a few things down, and then he only went and wrote an anthem.”

What transpired from their collaborative effort? A rap featuring not only Sheeran and Oliver, but also the help of their friends Paul McCartney, Hugh Jackman, Alesha Dixon, Us the Duo and Professor Green.

“My name is Jamie Oliver / I’m here to say / I wanna talk about Food Revolution Day / Half the world is starving with too little to eat and the other half die for being obese,” spits Oliver.

Jackman didn’t lend his rapping skills to the video but he did offer some spoken word and some dancing.

Check out the video here and be sure to sign the #FoodRevolutionDay petition here. The special day takes place tomorrow.

Previous ArticleTim McGraw to Executive Produce and Star in New Crime Drama "Robbers"Next ArticleYES PLEASE by Amy Poehler: "I have the Angelina Jolie of vaginas."