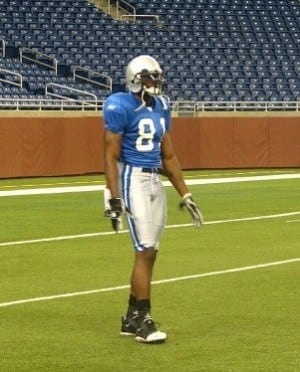 The Detroit Lions at one point only won the award of a high draft pick because there subsequent season was so lousy. In 2007 they picked up receiver Calvin Johnson as the second round draft pick. Calvin Johnson was with them for the only team in history with a winless season in 2008. The club remains to be 1 of 4 that has yet to qualify for a Super Bowl but that all hopes to be changed in the near future, besides that winless season, that ain’t going away.

The Detroit Lions re-signed Calvin Johnson with an 8-year contract worth up to 132 million dollars with a guaranteed $60 million. This remains to be the largest deal in NFL history and interrupts Johnson current contract that will now extend to the 2019 season.

“I’m so comfortable here now,” said the 26-year-old Johnson at a news conference Wedenseday, “At first, not at all, but being here for five years, being around these people here in Detroit, teammates and just the city — I’m just growing accustomed to it.”

“Calvin’s one of those guys — we’ve said this about a few guys that we have in our building — whatever they pay him is not enough,” said Lions coach Jim Schwartz. “He’s truly a special player.”

With Johnson locked down for the next 8 seasons and quarterback Matthew Stafford returning after a full season of health, the Lions are setting up to have another outstanding season, after qualifying for the playoffs last year, the first time since last century (1999).