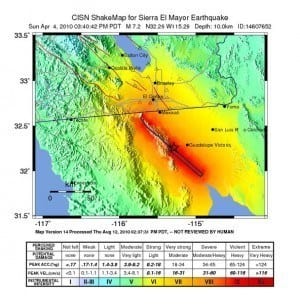 A swarm consisting of earthquakes up to 5.5 magnitude will be felt for days in Southern California and surrounding territories.

These jolts could last for days say scientists, causing the towns affected buy the California earthquake swarm to feel even more shaken up. It has been reported that 20 mobile homes have been pushed off their foundations, causing them to be inhabitable. Power outages have also affected 2,500 Imperial Irrigation District customers, according to the Seattle Times. Hotels, homes, stores and hospitals are just a few locations to be affected by the California earthquakes’ side effects.

The largest quake in the California earthquake swarm registered at a magnitude of 5.5, which struck at 1:57 p.m. Sunday, Aug. 27. This quake shook just 3 miles outside of Brawley, California, a small farming town east of San Diego.

The swarm, which includes quakes ranging from 3.0 to 5.5 in magnitude, has caused both aftershocks and the feeling of jolts in other part of California, in addition to Northern Mexico and Arizona, according to the Boston Herald.

Officials were urging residents to conserve water Sunday, and some schools were planning to close Monday, according to the Los Angeles Times blog. “It’s not uncommon for us to have earthquakes out here, but at this frequency and at this magnitude it’s fairly unusual,” said George Nava, the mayor of Brawley. “And the fact that the aftershocks keep coming are a little alarming,” he said.

Although much of the damage caused by the California earthquake swarm is cosmetic, including to three downtown building that date back to the 1930’s, residents of Brawley are on watch until the shakes, quakes, and jolts come to an end.