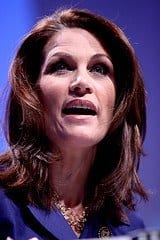 Michele Bachmann has been a George Bush enthusiast for as long as she’s been in the public eye.  But their rapport goes farther back than the public display of affection she showed him at the 2007 State of the Union, says politico.com.

In her book “Core of Conviction”, released Monday, she reserves an entire chapter to tell the story of her first meeting with the then President.  Several months before the State of the Union, Bush had come to Minnesota to campaign with her, and “unexpectedly invited her to ride with him in the presidential limousine.”

Bachmann shares that she was worrying over what to wear for meeting him, and that she had bought a pink suit with matching accessories on the advice of her mother.  “He looked down at my pink-gloved hand and asked with a crinkly smile: ‘Why are you wearing those gloves?’”, she writes.

After explaining her mother’s wishes to Bush, she says he “thoughtfully” disagreed, “gently” saying, “Lose the gloves.”  Bachmann continues to flatter Bush throughout the book, as well as Bush’s top aide Karl Rove, who was also conversing with them in the limo.