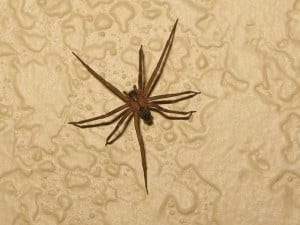 The brown recluse spider is arguably one of the most dangerous spiders to exist in America, and now with record-breaking heat and expansive patches of the U.S. experiencing the worst drought in decades sightings of the brown recluse are increasing.

The brown recluse can often be mistaken for common house spiders, however, the venom from the brown recluse is something to be avoided, causing irritation to the skin, lesions, and in rare cases typically involving children and the elderly, even death.

“All insects are cold-blooded, so in extreme heat they develop quicker, which results in more generations popping up now compared to previous summers,” according to Jim Fredericks, an entomologist and wildlife ecology expert with the National Pest Management Association.

The extreme heat sweeping across the country has not only contributed to more generations of spiders and therefore more of the creepy-crawlies, it is also forcing the brown recluse to seek shelter inside homes.

“All spiders have a venomous bite, but only a few can be medically dangerous to humans, and the brown recluse is a top concern,” Fredericks added.

“A common misconception is that spiders like to bite people,” continued Fredericks. “But they actually don’t recognize people as a food source, and will typically only bite as a defense mechanism.”

The bite of a brown recluse may go unnoticed at first, but within three to eight hours the bite will become swollen, red and tender to the touch. Ninety-five percent of brown recluse bites will heal after this stage and not result in serious damage to the skin tissue.

In rare cases, however, the venom of the brown recluse will break down the cells in the skin and develop into a necrotic lesion requiring immediate attention. This process takes approximately two to three weeks.

“It is rare for a brown recluse [bite] to result in death, but it can occur in children or adults who are allergic to the spider’s venom,” said Fredericks. “It [is] best to get medical attention right away if bitten, to make sure you aren’t allergic.”

The brown recluse is predominately found in the midwestern and south-central portions of the U.S.

“They are called recluse for a reason – they can fall far back in the walls once you use poison and I’m told they can go for up to nine months without eating,” Baumann said, adding he has called his landlord “about five times.”

“People say ‘why don’t you move,’ but they could be inside my stuff, inside my couch,” Baumann added. “I’ll try to go through everything with a fine tooth comb, but you can’t catch everything.”

Baumann has resorted to drastic measures, such as shaking out his clothes and shoes before putting them on and moving his bed away from the wall. The end is in sight for Baumann, who remains optimistic. He has said his landlord will move him into a new unit within the building in August.

“It could be worse,” Baumann added. “There was a house in Kansas City with 2,000 brown recluse.”