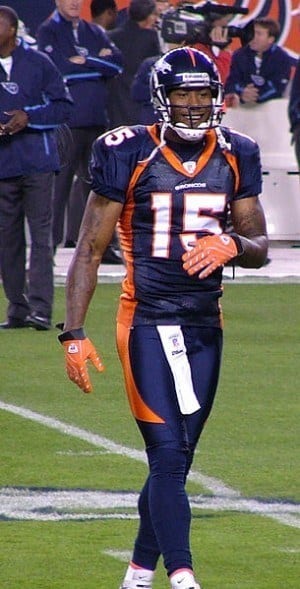 According to the New York Post, Christin Myles, the birthday girl, left her upper floor party spot around 4 a.m. to greet a friend downstairs. When Myles tried to return, she was not immediately let back up. A bouncer reportedly told Myles that Brandon Marshall and another football player were fighting and getting thrown out of the club.

Shortly after, Myles found Marshall and the unknown athlete arguing with her friends. Brandon Marshall allegedly hit Myles in the left eye. It wasn’t clear if the athlete meant to hit the woman or if he was aiming for someone else reports said.

Brandon Marshall and his wife were at a Manhattan nightclub early Sunday after attending a charitable event, when he got into a fight with a group of friends celebrating a birthday bash.

Myles filed a police report Monday with the 10th Precinct against Brandon Marshall. She told the police that she waited a day before making the allegation because she was nervous about Marshall’s high-profile status.

According to The Post, this is not Brandon Marshall’s first run-in with the law.  The NFL star has a history of arrests that includes disorderly conduct, drunk driving and domestic violence. Marshall was stabbed less than a year ago in the abdomen with a kitchen knife during a domestic dispute. Marshall’s wife, Michi Nogami-Marshall, was arrested but charges were later dropped.

Brandon Marshall’s lawyer, Harvey Steinberg, released a statement that does not specifically address the allegations that Marshall hit anyone.

“On March 12, 2012 Brandon Marshall was the keynote speaker at a charitable event in New York. After the event was over, he and his wife and close friends attended a function at a local club. While at the function a fight broke out NOT involving Mr. Marshall or his friends. While attempting to leave to avoid the melee, Mrs. Marshall was struck in the face by a thrown bottle. She suffered serious injury.While attempting to leave and take his wife to the hospital, the mayhem continued outside. Finally Mr. Marshall was able to take his wife to the hospital where she was treated for serious injuries. Mr. Marshall is hoping to assist authorities in regards to this matter.”

It was announced Tuesday that Marshall was traded to the Chicago Bears. “Both the Bears and Dolphins were aware of what occurred over the weekend,” Bears GM Phil Emery said in a statement reported by the Chicago Tribune. “We decided to move forward with the trade. We have high expectations for Brandon as a Bear.”