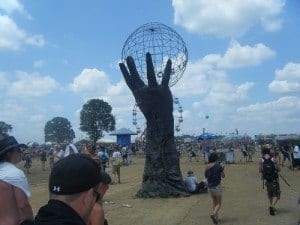 Bonnaroo Festival is the largest party in North America.  Literally.  Every year 100,000+ music lovers, festival enthusiasts and raveheads pack the 750-acre home of Bonnaroo Music Festival, for four days of tunes, tales and debauchery.  Since it’s inception in 2002, Bonnaroo has grown upward and outward, pumping $20 million a year into the Tennessee local’s economy, and every year upping the ante by bringing you the biggest names in the business.

This year, Bonnaroo certainly did not disappoint the crowd with its powerhouse line-up.  Headliners Paul McCartney, Bjork and Mumford & Sons are certain to bring the fire and have the festival sold-out within hours, if not minutes.  “Top to bottom, this is one of the strongest lineups we have ever had,” Bonnaroo spokesman Jeff Cuellar said in an interview. “Looking at the festival landscape out there … no other American festival has Mumford & Sons, Paul McCartney and Bjork all under one roof.”

Tickets for Bonnaroo Music Festival are on-line on Saturday, February 23rd, and will undoubtedly quickly become a hot commodity as eager beavers swamp the server and clear out face value tickets.  As popular as festivals have gotten over the past couple of years, it pays to be on your game and buy admission pronto.

Bonnaroo itself is a welcome, “grassroots” style alternative to the chic Coachella pre- and post- festivities.  While both festivals boast the biggest amount of festival attendees, they each offer a specific type of flair for the modern festival go-er…Do your research and get your tickets in gear, the festival season has just begun!