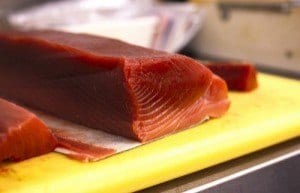 The levels of radioactivity remain well-below the safe-to-eat limits imposed by the U.S. government

Bluefin tuna have made a long trek across the Pacific Ocean, carrying with them radiation levels a reported 10 times higher than in past years as a result of the March 2011 disaster that left Japan’s Fukushima Dai-ichi nuclear reactor badly damaged.

The massive bluefin tuna have carried radioactive contamination across 6,000 miles of ocean to the shores of California, according to findings published online Monday in the Proceedings of the National Academy of Sciences. This finding is the first time a large migrating fish has been found to carry radioactivity over such a long distance.

Smaller fish and plankton have previously been found with elevated levels of radiation in Japanese waters. It was believed that radioactive contamination would wash away long before migrating fish crossed the entirety of the Pacific Ocean.

Nicholas Fisher, one of the researchers with the National Academy of Sciences, who participated in the study said, “We were frankly kind of startled.”

Pacific bluefin tuna can grow to one of the largest and fastest fish in the sea. Bluefin tuna can reach 10 feet in length and weigh more than 1,000 pounds. The tuna spawn off the Japanese coast and migrate to school in warm waters off the California coast and near Baja California, Mexico.

Fisher decided to investigate levels of radioactivity in Pacific bluefin tuna caught off the coast of San Diego five months after the Fukushima disaster. The team of researchers collected tissue samples from 15 captured bluefin tuna and found levels of both cesium-134 and cesium-137 that were higher than in previous recordings.

The researchers also tested yellowfin tuna found in the eastern Pacific and bluefin tuna that had migrated before the nuclear disaster in order to rule out the possibility that the radiation was delivered to the U.S. coast by ocean currents or by the atmosphere. The team found no levels of cesium-134 and minimal levels of cesium-137, presumably the remnants of Cold War nuclear testing in the 1960s.

Ken Buesseler of the Woods Hole Oceanographic Institution believes the results “are unequivocal. Fukushima was the source.”

Bluefin tuna can absorb radioactive cesium by swimming in contaminated water and feeding on radioactive prey such as krill or squid, according to the researchers. As the tuna migrate east through the Pacific, they lose some radioactivity through metabolism and as they grow in size. This, of course, means that the levels detected off the Californian coast were, at one time, much greater.

“That’s a big ocean. To swim across it and still retain these radio nuclides is pretty amazing,” stated Fisher.

Despite concerns, the levels of radioactive cesium found in bluefin tuna are well below safe-to-eat limits imposed by the U.S. and Japanese governments. It is worth noting that radioactive cesium can be found in numerous foods across the American diet, including many meats and vegetables. Ingesting radioactive cesium is, in most cases, harmless to the individual as the natural digestive process flushes the compound from the body.

Ironically, an article appearing in The Japan Times in 2011, titled, Hold the cesium: Ways to reduce radiation in your diet suggested that, despite the long half-life of cesium-134 (two years) and cesium-137 (30 years), “The good news is, cesium can be easily dissolved in water. So the best way to prepare vegetables and fruits is to rinse them well before cooking.”

The researchers that studied bluefin tuna plan to repeat the study with a larger sample size this summer. Now that it is known that bluefin tuna can carry radiation across the ocean, researchers also want to track the migrations of other species such as sea turtles, sharks and seabirds in order to better gauge the effect of the Fukushima disaster on these species.