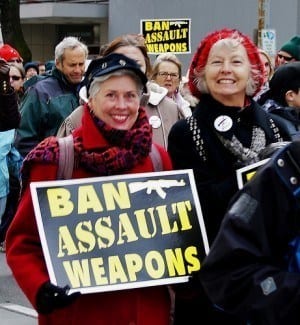 The Assault Weapons Ban has been passed by the Senate Judiciary Committee.

The Assault Weapons Ban has passed the senate committee. The ban has some house senates at odds on grounds of defending constructional rights versus preventing another Sandy Hook-like shooting. Senator Dianne Feinstein, D-Calif, is taking the heat from republicans who highly oppose the bad she sponsored.

The Assault Weapons Ban, which passed on a party-line vote of 10-8, bans weapons that carry more than 10 rounds and semi-automatic weapons that have at least one military feature. About 157 weapons meet the criteria and may be prohibited if the bill is passed on the senate floor.

According to Yahoo News, President Obama praised the Senate Judiciary Committee for passing the ban and helping to reduce gun violence.

“These weapons of war, when combined with high-capacity magazines, have one purpose: to inflict maximum damage as quickly as possible. They are designed for the battlefield, and they have no place on our streets, in our schools, or threatening our law enforcement officers,” said President Obama.

The Assault Weapons Ban was rejected by the full congress in 2004. If not for the recent shootings, such as the one in Newton, Connecticut three months ago today, it would be expected to be rejected again. But lawmakers are consistently passing bills that are in conjunction with the Assault Weapons Ban.

On Tuesday, the committee voted in favor of a bill that requires extensive background check on gun buyers and another bill that will renew grant programs for school security. Both bills are set to face the senate floor as early as next month.

Senator Ted Cruz, R-Texas, criticized the Assault Weapons Ban and asked Senator Dianne Feinstein if she would apply regulations to the first and fourth amendments along with her ban. Senator Dianne Feinstein retorted “I am not a sixth grader…” and continued to explain her political history and credentials for proposing the Assault Weapons Ban. She later apologized to Senator Ted Cruz for letting him get her “dander up”.