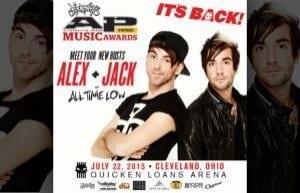 The Alternative Press Music Awards are back!

The Alternative Press Music Awards will return this July with host Alex and Jack of All Time Low.

Taking Back Sunday, A Day To Remember, Being as an Ocean and Real Friends are just some of the nominees announced on Tuesday.

Additionally, this year’s show will includes an exciting lineup of performances from Weezer, All Time Low, Panic! At The Disco, the Madden Brothers, Echosmith and more.

The event will take place at the Quicken Loans Arena in Cleveland, Ohio where fans can use their ticket to the show to tour the Rock and Roll Hall of Fame beforehand to get a little bit of a history lesson.

Tickets for the APMAs go on sale Friday, April 3 and voting is now open for the event which takes place on July 22.