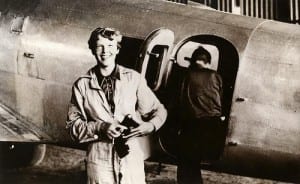 A recent expedition investigating the Amelia Earhart plane crash and her ultimate disappearance in 1937 has found potential evidence of her plane off of Nikumaroro Island in the western Pacific Ocean. Researchers took a high definition video of the seabed near the island and have since been analyzing footage of debris that they believe resembles parts of Earhart’s plane. The location of the debris is consistent with other researchers’ speculation about where her plane crashed.

In terms of the Amelia Earhart discovery, Richard Gillespie, director at The International Group for Historic Aircraft Recovery (TIGHAR), has said, “We see elements in the underwater photos at that are consistent with pieces of landing gear.” When analyzed, the debris appears to be a plane’s wheel and a possible strut, similar pieces that are depicted in a 1937 photograph taken off the Nikumaroro shore.

“This is a promising development,” says Gillespie.

Earhart, accompanied by navigator Fred Noonan, disappeared on the last leg of their around-the-world trip on July 2, 1937 as they headed to Howland Island from Papua New Guinea. They planned to refuel on Howland Island and then proceed on to California. In her last radio message, Earhart claimed that they could not locate the island and were running low on fuel.

This is the 10th expedition in the past 23 years, and the evidence, although nowhere near a conclusion to the mystery, makes researchers hopeful.

Gillespie seems confident in the Amelia Earhart findings, stating, “If it’s airplane debris, it’s almost certainly related to Amelia. There is no other aircraft missing out there.”