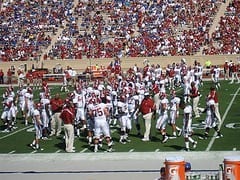 Although the game was billed as a defensive showdown, Alabama’s offense took center stage early as the Tide scored on their first three possessions to take a 21-0 lead, putting Notre Dame in a hole they would never dig themselves out of.

Alabama would eventually take a 35-0 lead in the third quarter, putting the game out of reach before Notre Dame was able to score two touchdowns in the last 20 minutes of the game.

Notre Dame won the opening coin toss but elected to give the ball to Alabama. Five plays and less than three minutes later, the Crimson Tide found the end zone on a 20-yard run by Eddie Lacy.

“They were kind of predictable on defense. We knew what they would do, so it was just a matter of executing,” said Alabama offensive lineman DJ Fluker.

At the end of the day, there was only one word on Alabama long snapper Carson Tinker’s mind: