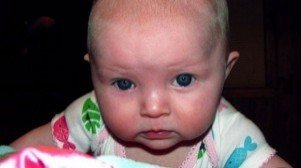 Over a month ago, we reported about the disappearance of Lisa Irwin, a 10 month old Kansas City infant that was allegedly taken from her home right under her mother’s nose.

Since then, police have been trying to find the infant and have had very small leads, from people thinking they saw Lisa to the huge debate about the mother being drunk the night of Lisa’s disappearance.

Recently, the Irwins’ lawyers have commented that a phone call placed on the stolen cell phones of the parents have ruled them innocent of any invovlement.
One of the phones was used a little before midnight on October 3rd to a woman the couple does not know.

Lawyer Joe Picerno says that this evidence, ” tells you is our clients are telling the truth.”

The caller did not reach the woman, who has since then been identified as Megan Wright, and Wright can’t explain the circumstances of the call either.

Someone also attempted to access the voicemail and Internet on the cell phone on October 4th.

No word from police on any details of this case.