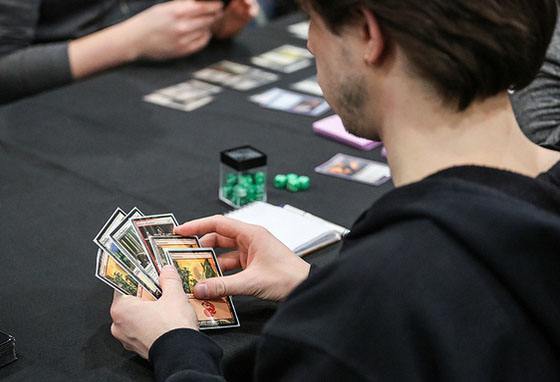 You may have heard of Magic: The Gathering before, and it’s possible that you have also heard a host of negative stereotypes that ominously circle its good name like buzzards over a decaying carcass, this is why we created a guide to Magic the Gathering to avoid negative stereotypes. Magic is not a game exclusively set aside for fantasy enthusiasts or zealous role-players. Magic is, instead, a relatable and accessible card game that could literally be one of the most complex and outstandingly well-structured games of the century. It is a game that has enough appealing facets to capture the attention of everyone willing to wade through the bad press and take a look at its intricate mechanics and artwork. Let’s take a brief crash course on why Magic stands as one of the most impressive games ever created.

Magic: The Gathering was first published in 1993 by the company Wizards of the Coast. It claims fame as being the first trading card game ever produced, and since its conception has won numerous awards until its most recent achievement, an Origins Award, for having the best collectible card game expansion of 2012. Each year expansion packs for the game are conceived, developed, and published, keeping the game fresh and allowing for new gameplay mechanics to be explored and utilized.

The game is played with two or more players and consists exclusively of cards. Each player has their own deck, which must have at least 60 cards. There are spells, artifacts, and creatures, all of which may be employed in the act of defeating an enemy player. Players have “life totals” that start at 20, and when that total reaches 0, the player is considered “dead.” Given that there are literally thousands of different cards with new cards coming out every year, there are a million different ways to utilize the spells, artifacts, and creatures in tandem to successfully outwit your opponent.

Magic is a magnificent specimen of a game simply because of its ability to provide for a limitless number of different strategies to be utilized. In other words, you get to customize your deck and make it play the way you want it to. Like using cards that feature rats with special abilities like deathtouch? Make a black rat deck. Like the artwork for angels and griffins? Design a white griffin and angel deck. Like making deaths as slow and painful as possible for players? Like destroying players as quickly as you’re able? These are all possible strategies in the wonderful, and sometimes devastating, world that is Magic: The Gathering.

You should also read: We review Magic Duels: Origins

It’s also completely possible to play Magic purely for its aesthetic value. Magic is, bar none, the most exquisite card game out there. Cards feature designs from different artists that range from being hauntingly grotesque to breathtakingly beautiful. No one will judge you for collecting cards that you like only because of their design.

In short, there’s no reason not to begin your Magic collection now. It may take a little while to master the basic gameplay, but once you have the fundamentals down there’s nothing stopping you from becoming an unrelenting strategist. Customize your deck to suit your personal needs and, when you’re brave enough, enter the many tournaments that are available to try your hand at defeating other serious players.