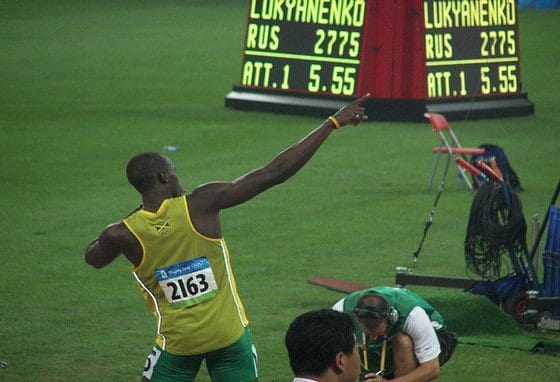 As the Track and Field World Championships in Beijing move forward we have an amazing opportunity to watch one of the greatest of all time and the greatest sprinter in the world at this moment Usain Bolt take on hungry competition. Bolt who has limped through 2015 with nagging injuries has taken all adversity to somehow put himself in position to take home more hardware at this year’s World Championships. On Aug 23rd he took on the best in the world in the 100M including United States on Tyson Gay and Justin Gatlin who were prime for the upset this year. With Gatlin running a 9.77 second 100M in the semi-final the odds were for a change up against Bolt.

Gatlin who has dominated the sport the last 2 years with Bolt dealing with his multiple injuries came into the World Championships as a favorite despite never defeating Bolt at his full potential. Gatlin has had problems pertaining to illegal doping over the years has taken the role as the bad guy. That has been the dialog of the Champions good vs bad and it all played out in the 100M race.

Usain was able to withstand his struggles and pulled out an amazing win, a win that looks to be one of his most impressive when you think about the totality of the stage he was on. He seems to step up to the challenge every time there is one placed in his face. He looks to have overcome the adversity 2015 has thrown at him to place his name among the greatest of all time like Carl Lewis by surpassing Lewis with his 9th Gold at the World Championships and 11th overall. He has a chance to stretch that margin later this week.

Bolt started off better than he has in the last few previous races but seem to pull it all together the last 10-15 meters storming back to catch a stumbling Gatlin and winning the heat with a time of 9.79 seconds. This narrowly beat Gatlin by a small .001 second margin. Gatlin who won the 2004 Gold medal in the Olympics has been itching for anther gold after spending 4 years on probation for a doping violation. Still his efforts and great start to the race could not hold off the 6’5 Bolt who darted past him and leaned forward at the last second to take the win.

Usain has already been regarded as one of the best sprinters ever for some time now but this performance has the track and field world excited about the future of the sport. The clean cut good spirited Jamaican story of overcoming is one that resonates with the masses. Bolt will run in the 200M later this week with an opportunity to etch his name into the history books once again.

Other Stories of World Championships

There are several other highlights that took place at the World Championships as well with Shelley Ann Fraser- Pryce of Jamaica taking home the gold with a 10.74 second performance in the woman’s 100M Race. She looked dominate and lead the way the entire race. Jamaica still holds hierarchy in sprinting.

America takes home their first gold medal in Beijing this year with a win in shot put by Joe Kovacs who defeated the 2 time defending champion out of Germany to claim the medal. Also Britain’s own Jessica Ennis-Hall returns to action after having her son 13 months ago to claim the gold medal in the heptathlon. The games continue all week long and I hope you are excited as I am. Looking forward to seeing Bolt go for another win in the 200M as well as the 4x100M relay race.