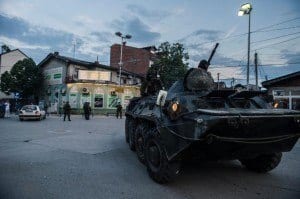 On Sunday, Macedonian police conducted an operation against gunmen in the northern town of Kumanovo which lies 40 kilometers north of the capital Skopje.

The operation started early Saturday and the gun battles had left 37 policemen wounded and 8 dead. 14 other bodies were also recovered at the site.

Authorities faced grenades, sniper fire, and automatic weapons as they moved in on the armed group. A perimeter had been set up and dozens of people, mostly women, children and the elderly, had fled the zone prior to the assault.

The interior ministry stated that about 20 gunmen that surrendered on Saturday would be brought to trial in Skopje as an ongoing investigation concerning ethnic unrest.

The ministry also stated that the armed group were planning terrorist attacks on state and civilian institutions.

According to Macedonia police spokesman, Ivo Kotevski, the group included individuals with international arrest warrants and included ethnic Albanians from Kosovo and one Albanian aside from the Macedonians.

NATO Secretary General Jens Stoltenberg, stated, “I urge everyone to exercise restraint and avoid any further escalation, in the interest of the country and the whole region.”
Both NATO and the EU warned of escalating the violence in a region that broke into an ethnic Albanian insurgency in 2001. Albanians make up about a quarter of Macedonia’s 2.1 million population.

The 2001 insurgency ended in an agreement that provided more rights to the minority, however ethnic tensions remained and the violence in Kumanovo can be attributed to institutional weakness in the government.

The government and centre-left opposition have both accused each other of bribes and wiretapping.