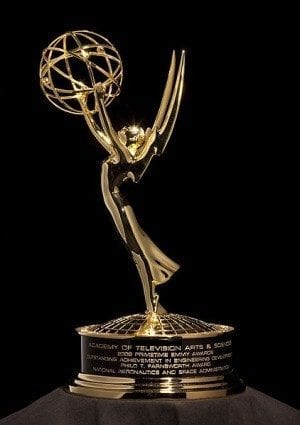 The 2012 Emmys kicked off Sunday night with late-night host Jimmy Kimmel spearheading the ceremony. What played out to be a three-hour telecast evolved into a redundant, self-questioning awe fest as many of the same TV personalities and shows received the golden-winged statuette in multiple categories.

The most coveted award at the Emmys was picked up by Showtime’s CIA thriller “Homeland,” unseating AMC’s prize dog “Mad Men” which won the award the last four years. “Homeland,” starring Claire Danes who also took home an Emmy for Lead Actress in a Drama Series, along with co-star Damian Lewis who took Best Lead Actor in a Drama Series, helped Showtime upstage rival network HBO as the CIA thriller kept shows like “Boardwalk Empire” and “Game of Thrones” out of the running.

But the Emmys were not entirely a showcase for premium channel programs. Network series like “Modern Family,” which won Best Comedy Series and produced winners in both Supporting Actor/Actress categories, and even a baffled Jon Cryer who won the Emmy for Best Lead Actor in a Comedy Series walked away with golden statue Sunday night, raising questions regarding the basis of judging winners.

Perhaps the most shocking bit the Emmys had to offer folks at home was the award show’s snubbing of reigning Best Drama Series champ AMC’s “Mad Men,” which took home zero awards on the night. If Don Draper was a real person, he would have carried on in his usual Draper-esque manner America has come to love, celebrating his non-wins with a bottle of brown liquor and enough cigarettes to choke a meth lab (also a reminder that fellow AMC series “Breaking Bad” only managed to cook up one award for Best Supporting Actor in a Drama Series for Aaron Paul).

“Daily Show” host Jon Stewart might have summed up the Emmys significance when he received the Emmy for Outstanding Variety Series, the show’s tenth consecutive award in the category when he said, “Years from now, when the Earth is just a burning husk and aliens visit, they will find a box of these,” Stewart said as he held up the golden award, “and they will know just how predictable these f—— shows are.”

Other notable winners include Julia Louis-Dreyfus’ win for Lead Actress in a Comedy Series with her HBO show “Veep,” and Julianne Moore’s win for Outstanding Lead Actress in a Miniseries or a Movie for portrayal of Sarah Palin in HBO’s “Game Change.”