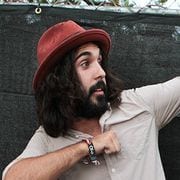 Formerly known as The Jakes, a name change to Young the Giant and a handful of new songs seems to have launched the band into commercial success over night. After being featured as MTV’s push artist of the week and a performance of their slap in the face track “My Body” on the 2011 VMAs — their debut album, “Young the Giant,” has peaked as the 36th top rock album on Billboard and remains on the charts today. Their performance at Austin City Limits this year was nothing short of magical as a (much welcomed) rainfall began during their rendition of “Apartment.” I met up with bassist Payam Doostzadeh afterwards to discuss his lack of concept of time, recording, their success and the future.

Payam Doostzadeh:  What year is it?

PD:  Yeah, I guess. I was the last member to join.

AA:  But, you guys had all know each other before.

PD:  Yes, I had know Sameer the longest, since we were eight — we used to play soccer — is that Skrillex? [insert sigh]

PD:  We were sitting next to their manager on the plane. Anyways, I’ve known Sameer since we were eight, we played soccer together and I hated him because he was much better than I was. I just kind of hated him from that point and then Jake moved from England when he was like 12 and me and him started a band, and then me and Sameer started playing in a band when we were like 14 — it was an acoustic band called Cable Car.

I’ve been playing music with those guys for a while, then I joined as a temporary bassist for the Jakes because they had to go on like a California tour and they needed a bassist, so I joined and I haven’t left.

Katie Pucheu-Morvant (Filmer): It [the band] was called the Jakes before, right?

PD:  Yes, but now it’s called Young the Giant. Why? I don’t know. It means nothing, it’s not pretentious, it’s not because we think we’re huge.

KPM:  How did you guys come up with that?

PD:  Sameer just blurted it out. We wanted to be something young, like the Young Turks but that’s already a band, like the young something. And Young the Giant, he just like said it and we lived in Hollywood, we all lived together and upstairs we had a loft which was a studio as well as Jake and Francois’ bedroom. And once he said Young the Giant we were all like, “yeah, that’s cool — let’s work on that.”  We went upstairs and we jammed out like three or four songs under the guise of Young the Giant and it just worked. Everything seemed really good.

AA:  Well, under that guise it seems like you guys have done a lot more than with your former band.

AA:  Yeah I know — but it’s kind of amazing because you got to work with um, how do you pronounce his name?

AA:  Yeah, you worked with him and he’s an amazing producer.

PD:  Intense. He’s a very knowledgable producer, almost too knowledgeable. He’s worked with you know some of the best musicians in the world — not including us. Sorry, I phrased that weirdly. We do not fall in that sub-set of greatest musicians in the world. I’m talking about like, U2 and I don’t know everyone, My Morning Jacket and the Raconteurs, the White Stripes — Jack White.

So you know, it was a great learning experience. He definitely pushed us beyond our limits.

AA:  Did you ever expect that to happen or was that just a happy surprise?

PD:  I was not expecting that at all, I thought that we were going to work with some random producer. He was excited, we were excited, the label was excited, everyone was excited — so it worked out.

AA:  Why did you guys choose the label (Roadrunner Records) that you’re on, because it’s mainly a metal label.

PD:  Yeah, I know — we get that question a lot. Primarily because they were the most interested in us. They were the ones who were coming back, time after time. Here in Austin, two years ago — was it two years ago? At South By [Southwest] ’09 they approached us everyday — we want to sign you, sign this contract — let’s do it.

So, us being young and, mainly our management helped us out with the decision, too, but we were like f’ it, let’s go with these guys. They’re a metal label that’s trying to break an indie band so they’re going to put everything they have into it. Nowadays, record labels aren’t as important as they were 10 years ago — we have Internet now… [looks around] Something smells good, sorry.

But yeah, because of that dedication they had towards us it was really the deciding factor of why we went with them.

AA:  It’s paying off, too, because you guys played at the VMAs recently.

PD:  Yeah, that was ridiculous.

AA:  Were you so nervous?

PD:  No, luckily we had our good family and friends up front in the crowd. It was just really cool to see them, like super excited and a bunch of celebrities in the background that I don’t really care about — more importantly my friends, you know. They were loving it and we fed off that energy and it was truly amazing experience.

AA:  When did you first start playing the bass?

PD: [laughs] I started playing bass in middle school, I played upright bass because I wasn’t good enough to play violin in orchestra. Yeah, I was in orchestra throughout high school and elementary school and everything. I wasn’t good at violin because I never practiced in the summer, I just f’ed around. So, I played stand up and then Jake when he came from London, or England, we joined a band so I had to buy a bass guitar and that’s where I kind of transitioned.  So, like it’s been about eight, seven years — eight years? Nine years? I don’t even know how old I am anymore. [shrugs]

AA:  Either way, that’s a long time, but I know that you want to watch Skrillex and I do too, but what’s like next for Young the Giant?

PD:  Finishing the Incubus run, playing some radio shows, radio festivals in December like holiday shows, time off — well deserved — to write, chill, relax and then we have a headlining tour for the first half of next year. We’ll go to Australia, maybe Japan and then hopefully start recording the next album a year from today.