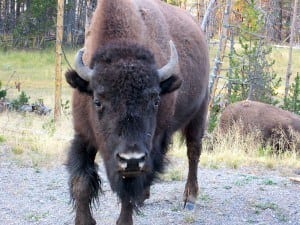 Adult takes video, tells kids to get closer before Yellowstone bison charges at the group

A Yellowstone bison charge almost resulted in serious injury for a young boy visiting the park this weekend. The incident, which began as a friendly inquiry into wildlife in its natural habitat, quickly turned into a harrowing near-miss that was caught on video.

The video of the Yellowstone bison charge reveals a group of tourists approaching a buffalo that is grazing freely. The adult who is capturing the video encourages the younger children to get closer and closer to the animal, with no fence or separation of any kind between them and the buffalo. The man whispers that the buffalo is friendly, and even though another member of the group notices the wild animal’s head movements and gestures, they keep telling the children to get closer and to touch the buffalo on the head. Little did they know they were inciting the Yellowstone bison to charge.

Moments later, the buffalo grunts and lifts its tail, a sign of aggression. Ignoring the warning signs, the children do not move away, and finally, the Yellowstone bison charges a young boy wearing a backpack. The boy moves away just in time, running around a tree and back onto the wooden pathway.

The video of the Yellowstone bison charge was posted to YouTube as well as to the Facebook page of the West Yellowstone Chamber of Commerce of Commerce. Park officials commented, saying that the video made them “angry, especially at the irresponsible person behind the camera.” The comment continued, “This group has no idea how incredibly lucky they were that no one was injured or killed.”