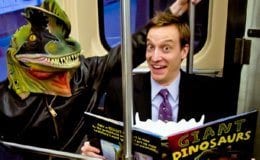 And so, Chicago, an era comes to an end. An era filled with Nickey Mouse, “Colors of the Wind” and chipmunk v– you know, let’s just leave it at chipmunks. Local comic Ken Barnard marked his departure from the Chicago comic scene with his penultimate performance last night and he held nothing back.

Barnard, whom we interviewed last year when he auditioned for “Last Comic Standing,” has been a staple of the Chicago comedy scene for the past five years. He recently announced that he would be leaving the Windy City behind for the glitz and glamor and opportunity offered by Los Angeles. To commemorate his final days in Chicago, Barnard organized his “Penultimate Ken Barnard Experience” and played to a full house at the Lincoln Lodge. Why make such a big deal out of his penultimate performance? Because, he pointed out, then he could totally phone in his final show.

If the show he put on Friday night, however, is any indication of how his final show will be, there won’t be any phoning in involved. After meeting and greeting the crowd wearing little more than a thigh-high pink bathrobe, Barnard emerged and, filled with emotion, confessed “Seeing all of your friendly faces, I just…I just can’t…I just can’t tell you how inarticulate I am.”

The evening’s joke lineup consisted of old favorites as well as new material, including a Beach Boys song parody, a game show and a man in the street segment. Helping Barnard celebrate the evening were pals and fellow “weirdos”/comics Michael Sanchez (who started his set by reciting comebacks to would-be hecklers), Chris Condren (who sang a song about a guy who went back in time only to discover Helen Keller was the head of the Illuminati) and DK Ediger (a self-proclaimed safety expert and accidentalist). Needless to say, the standing-room only crowd was left in stitches and reluctant to see the night end.

Although Chicago is losing one of the most original, crazy stand-ups on the scene, our loss is definitely L.A.’s gain. Keep an eye on Ken Barnard’s official site, Facebook page and Twitter account, and make sure to check him out if given the chance to see him live. You won’t regret it! In fact, for a taste of what’s in store, check out the video below!

Best of luck, Ken! Hope there is a cheeseburger in paradise waiting for you!