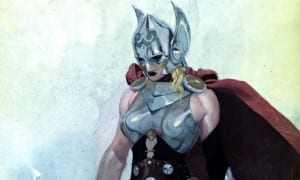 Marvel announced that they’ll be gender-swapping one of their most popular heroes-but have they missed the point?

Jason Aaron, series writer for the Marvel Thor comics, seems beyond excited about the gender-swap one of Marvel’s most recognised characters will be going through over the next year. And why wouldn’t he be? He gets to helm a whole new era, and pilot one of the most prominent plot twists in Marvel comic history.

But, unfortunately and predictably, not everyone has been as impressed with the news. Some fans have dubbed Thor’s new look as “Whor”, while others have hit Marvel with accusations of pandering to a feminist audience. It won’t take more than five minutes of trawling through the internet to find scores of passionate, furious hysteria over the upcoming gender change.

But something that’s coming up again and again- more quietly, but just as often- are questions about how valid the decision is. Sure, it’s great to see a woman taking a bonafide starring role in a high-profile comic like this-especially when you consider the fact that Marvel found the time for three Iron Man movies, two Thor movies, two Captain America movies, an Avengers ensemble movie, a S.H.I.E.L.D TV series, an Incredible Hulk movie and Guardians of the Galaxy before the Black Widow film was announced. But giving us a female version of a character who established his popularity and fanbase when he was a man feels like kind of a backhand- especially when you consider all the great superheroines who are left to languish solely in print form at best.

Captain Marvel, AKA Carol Danvers, has her own brilliant series and backstory to explore. She-Hulk gives an interesting, unique spin on a story that’s been adapted a bunch of times before. Mockingbird is just really damn cool. And, to be honest, I would much rather have seen an announcement surrounding their stories- some big twist, a TV series, a reboot- than see much of the comic-loving world up in arms over Thor becoming a woman (in ways that are yet to become clear, but do not involve gender reassignment surgery). My point is basically that Marvel deserve kudos for trying to expand the great women in their universe, but they didn’t really need to- they’ve already got so many waiting in the wings as it is.

Previous ArticleParody film "They Came Together" hits the markNext ArticleNFL Sunday Ticket to offer service without the need of a satellite subscription?