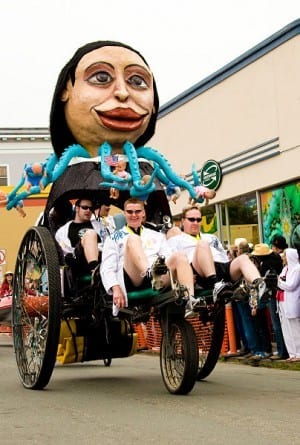 Octomom, lesser known as Nadya Suleman has filed for bankruptcy. She claims that she has up to $1 million in debt and owes $30,000 in rent, reports the AP. Her debt is roughly 20 times that of her net worth, given that the Octomom only has $50,000 in assets.

“I have had to make some very difficult decisions this year, and filing Chapter 7 was one of them,” Suleman, 36, said through an e-mail that her manager Gina Rodriguez sent. “But I have to do what is best for my children, and I need a fresh start.

With filing Chapter 7 bankruptcy, the Octomom will have all of her assets liquidate in attempts to pay her debts. But, under Chapter 7, most individuals are released from their debts. Though, a court will go through her finances to make sure that she isn’t abusing bankruptcy laws.

The Octomom is 11 months past due on her rent to Amer Haddadin, whom was the previous owner of the four bedroom house that the Octomom and her 14 children live in. The house was purchased under an all-inclusive deed, which leaves Haddadin with the deed and the Octomom responsible for paying him the monthly mortgage. Once she stopped paying her rent every month, the bank put the home into foreclosure.

Though, this isn’t her first time in the news in the past week. She has recently been fighting accusations that she is raising her children in squalor.  Her hairdresser gave photo to TMZ of the Octomom’s children using portable toilets outside and claimed that children were being locked in rooms. The Octomom disputed the claims, saying that she couldn’t afford the $150 to fix her plumbing. Though, she paid the hairdresser $520 for a Brazilian blow out.

“I think, maybe, me and my kids were set up,” Octomom said on Good Morning America. “We were set up.”

Currently, the Octomom receives about $2,000 each month. She originally made headlines back in January 2009 when she used fertility treatments to conceive eight babies.

Read more on the Octomom here.