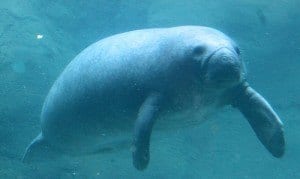 Manatee riding is strictly prohibited and punishable under state law. After just a routine day on the beach, this is the case against a woman who playfully hitched a ride on a sea cow in Fort DeSoto, Fl.

Gutierrez was photographed riding the manatee Sunday afternoon near the Gulf Pier. What ensued was a police search for the 52-year-old.

Pinellas County Sheriff Bob Gualtieri held a news conference to discuss Gutierrez’s manatee riding. Gualtieri called the manatee “a huge part of our culture here in Florida,” and “a very integral part of what Florida is about.”

“Go ride a jet ski. Don’t use animals,” Gualtieri continued. “She needs to be held accountable for her actions.”

According to Gutierrez, she knew nothing about the law because she was new to the area.

Gutierrez has not been charged for her manatee endeavor, but charges have been referred to the state attorney’s office. If Gutierrez is charged, she can receive a $500 fine or even a 60-day stint in jail.