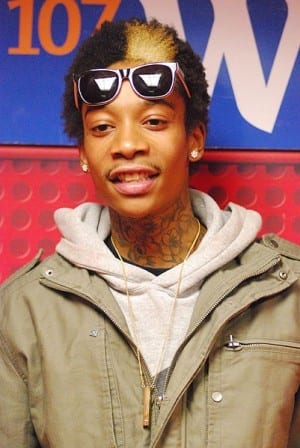 Khalifa tweeted later on that day, “I am so happy.”
Rose tweeted all her followers, “We Love all u Rosebuds, Rosestuds & Taylors so much! Thank u for all ur Love an Support 4 ya Muva & Fava’s Engagement!’

Several celebrity friends send their love towards the newly engaged couple including:
Snoop Dogg, who said, “congrats to my nef @realwizkhalifa and @darealamberrose on the engagement!!”
Paris Hilton: Congratulations @DaRealAmberRose & @RealWizKhalifa on your engagement! You make the perfect couple, so happy for you both! ♡☺
Russell Simmons: Congrats to @DaRealAmberRose & @RealWizKhalifa may they have happiness for the rest of their lives…

Wiz Khalifa, a rapper from Pittsburg, gained nation-wide  fame because of his debut single for Atlantic Records, “Black and Yellow,” which made it to number 1 on the Billboard Hot 100 list.

Amber Rose is best known for her modeling career and appearance in music videos such as Fabolous’s “You Be Killin Em. She also had a high profile relationship with rapper Kanye West. Rose is currently the spokeswoman for Smirnoff’s new flavors Whipped and Fluffed.

The couple began dating in early 2011.
No word on wedding details yet.

To see the ring and read more: click here or here