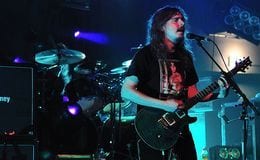 Mick Jagger and Damien Marley team up this week

School sucks. You know it, I know it. But in an unstable economy, where the American dollars doesn’t hold much value anymore, the country being downgraded to AA+ credit rating, you’re going to need all the education you can get. With that in mind, between all the studying and potential plans to save the country and the world, remember to take it easy once in a while. A relaxed mind is a healthy mind, I always say.

After a three year break from their 2008 album ”Watershed,” Opeth is recharged and bring on the metal with ”Heritage.” However, the album will have a couple of changes: there are no death growls and it will be the last album with keyboardist Per Wiberg. That aside, ”Heritage” should prove to give fans what they want.

Thrice has always been that one band that gets recognition, but not enough. They seem to be skirting the bank of stardom, but a towering wall is blocking their way. Hopefully, ”Major/Minor” will be the dynamite that will blow the wall away. Already the critics’ darling, Thrice took only a few months of jam sessions to come up with what you’re about to sample. Check out “Yellow Belly” below.

When it comes to piano playing, vocals, and songwriting, Tori Amos is always on top. Her songs can make hard men weep and contemplate their deeds. It’s that powerful. ”Night of Hunters” marks a shift in direction for Tori, as she opts for an orchestral backing this time. Woodwinds, violins, and her piano will be her guide throughout the album: a story about a woman who goes through an reinvention in one night as she endures a failing relationship.

Here is a grouping that will blow your mind: Rolling Stones front man Mick Jagger, singer Joss Stone, reggae superstar Damien Marley and Eurythmics founder Dave Stewart. Impossible? Well, that’s what they said about Aerosmith and Run DMC joining forces. So, with these musical legends congregating, they form Superheavy. And what, you may ask, do they sound like?  Well, like this…

By the way, this isn’t a stretch for Mick Jagger. In 1978, he sang the Temptations’ cover of “Don’t Look Back” with Peter Tosh.