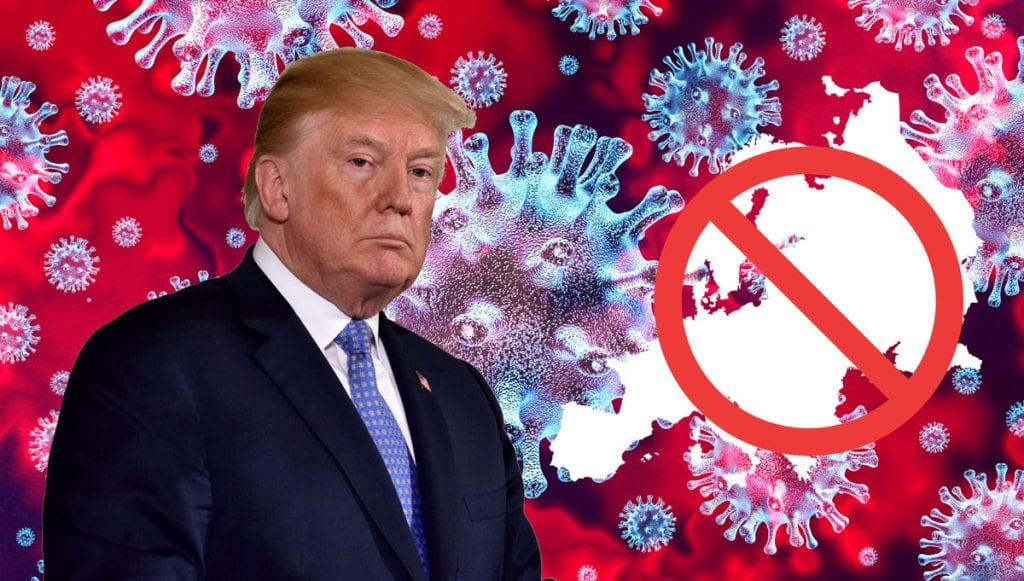 After weeks of playing down the spread of COVID-19, a novel coronavirus, President Trump finally issued a word of caution, telling Americans to be “very, very careful.”

The travel ban will take effect at midnight on Friday, and will initially be in place for 30 days.

“I am confident that by counting and continuing to take these tough measures, we will significantly reduce the threat to our citizens and we will ultimately and expeditiously defeat this virus,” Trump said.

The address was only his second time speaking to the nation from the Oval office, the first being in January 2019 during a partial government shutdown when President Trump asserted that funding for a border wall was essential for the nation’s security.

The specifics of the travel ban

Although it was unclear in President’s Trump address, the travel ban will not prevent Americans abroad from coming home. U.S. citizens, permanent residents and their families, health professionals that are part of international efforts to combat the spread of the virus, diplomats and air or sea crew are all excluded from the ban.

Although Americans travelling abroad at the moment should take note of the spreading virus, yesterday classified as a global pandemic by the WHO, and return home immediately, regardless of whether the travel ban applies to them or not.

Which countries are included?

The U.K., despite having almost 600 cases and hardly any social-distancing restrictions in place to stop its spread, and Ireland are not included in the ban. This technically means that if you are a European foreign national flying to the U.S., you could schedule a stay in the U.K. for more than 14 days and then be cleared to enter the U.S.

It’s interesting to note that the U.K. and Ireland both host Trump golf resorts.

Irish Prime Minister Leo Varadkar is due to meet the President on Thursday, and that meeting is still scheduled to go ahead.

Trade and cargo under a Europe travel ban

During his Oval office address, the President suggested that trade with Europe would be affected, saying “these prohibitions will not only apply to the tremendous amount of trade and cargo, but various other things as we get approval.”

However on Twitter afterwards, he said it was “very important for all countries & businesses to know that trade will in no way be affected by the 30-day restriction on travel from Europe. The restriction stops people not goods.”

Hoping to get the payroll tax cut approved by both Republicans and Democrats, and please remember, very important for all countries & businesses to know that trade will in no way be affected by the 30-day restriction on travel from Europe. The restriction stops people not goods.

The second assertion is correct—trade and cargo will not be affected. The exemption for air and sea crew from the ban in meant to keep goods moving smoothly.

The President accused Europe of spreading a “foreign virus” on American soil, saying the EU “failed to take the same precautions and restrict travel from China and other hotspots. As a result, a large number of new clusters in the United States were seeded by travellers from Europe.”

In fact, COVID-19 reached the U.S. a full 11 days before it reached Italy, the epicenter of Europe’s outbreak. And many clusters of infection in the U.S. are now caused by community transmission, rather than foreign travel. Despite this, little to no social distancing measures have been put in place, and testing remains inaccessible to most.

The EU, in turn, condemned the President’s unilateral ban. In a joint statement on Thursday, the presidents of the European commission and European council defended Europe’s record in managing the pandemic and sharply criticised the White House for its failure to consult its allies.

“The coronavirus is a global crisis, not limited to any continent, and requires cooperation rather than unilateral action,” Ursula von der Leyen and Charles Michel said in a statement.

Markets are not assured

Always sensitive to the stock market, the President said in his address that “this is not a financial crisis. This is just a temporary moment in time that we will overcome as a nation and a world.”

However, the markets seemed to be unassured by this statement, tumbling further when they opened today.

In other coronavirus news, many were saddened to learn that Academy Award-winning actor Tom Hanks and his wife, Rita Wilson, had tested positive for coronavirus. Hanks is one of the highest-profile celebrities to contract the virus as it has spread through the globe. At 63, he is more at risk, falling into a range where the fatality rate is estimated to be 3.6 percent.

In happier news, China has passed the peak of its outbreak, according to a spokesman for the country’s health ministry. COVID-19 was detected in Wuhan in December 2019, and saw a rapid spread through the country in the months since—Chin has recoded about two-thirds of the cases worldwide. However, on Thursday, there were just 15 new cases from the previous day.

For those who are doing the math and estimating that their own personal lives may be affected for only two to three months, it’s worth noting that China adopted very aggressive quarantine, social distancing and public health policies—things that are not being adopted elsewhere.

See also: Ultra Music Festival & SXSW Canceled From Coronavirus
James Bond Movie “No Time to Die” Release Pushed Back Amid Coronavirus Fears
How To Cope With Coronavirus Anxiety
COVID-19: Everything We Know About Coronavirus Right Now