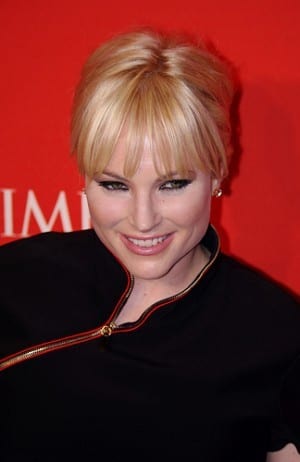 McCain speaks about current presidential campaign and her own sex life

Meghan McCain kept her clothes on for this April’s edition of Playboy, but she wasn’t shy about her opinions on this years campaign, the hardships she faced during her fathers presidential campaign or her sex life.

Meghan McCain, who wore a red-sequined dress and blue heels, said the current presidential campaign has bored her. “It’s just so lame,” she said. “Granted, my father is not running, so I’m biased, and we have an incumbent president, which changes things. But where’s the electricity? You’d think someone would rise up and tap the frustration and energy of the Occupy movement or the Tea Party, but it just hasn’t happened yet.” Meghan McCain also defended her right to voice her opinions on politics, “I’ve been in politics literally my entire life. My mom was pregnant with me at the 1984 Republican convention. I was on my father’s campaign when I was 13. I’ve earned the right to be here and talk about it.”

Meghan McCain told Playboy about her experiences with her father’s most recent campaign run in 2008, “The day before Election Day, I almost overdosed on Xanax. I had gained a lot of weight. I went up four sizes thanks to Starbucks and Snickers.”

Meghan McCain told Playboy that she hates talking about politics on a first date. “Talk about a mood killer,” Meghan McCain said, “I’m obsessed with this stuff, but it doesn’t put me in the mood. When I’m dating, I want to hear what music a guy likes, what he does for fun, and I want him to make me laugh. If he can make me laugh, I don’t care if he looks like Zach Galifianakis; it’s an instant turn-on.”

Meghan McCain spoke with Playboy about her love of going out for a Jack and Coke every once in a while and her love of Hunter S. Thompson. Thompson, known for his love of whiskey and fire arms, may have gotten along with Meghan McCain. “I appreciate both those things. We would have understood each other,” she said.