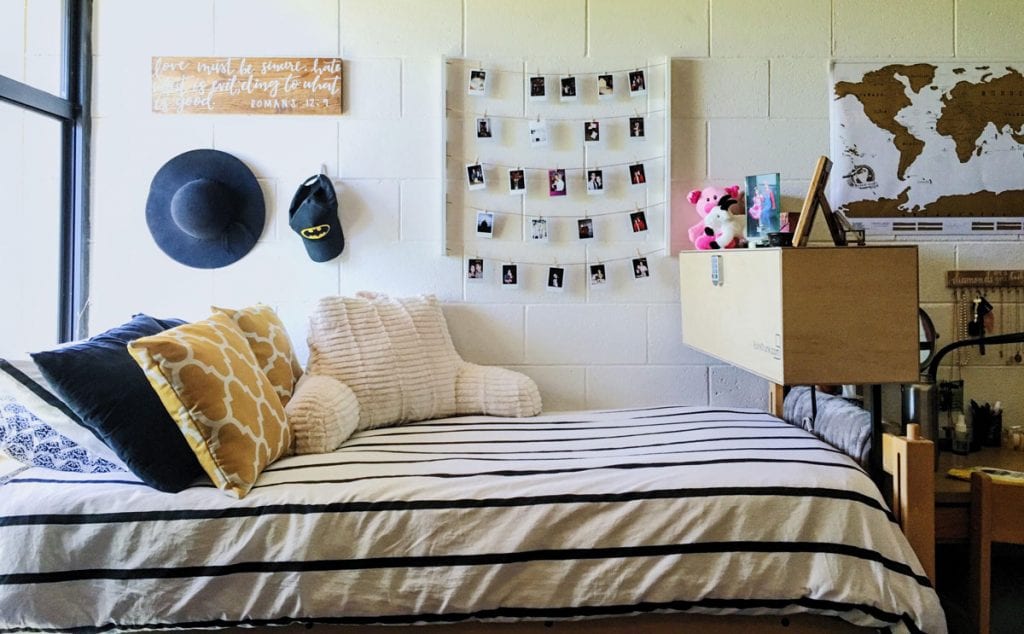 Our daughter’s departure to college came with mixed emotions. While we were excited for her to begin the next chapter of her life, there were also many “unknowns” that we were nervous about.

One of the “unknowns” gave us an idea that led to the start of a small business. It turned out that our daughter had a roommate that did not feel the need to lock, or at times even close doors when she would leave. So, when she moved into my daughter’s dorm room this propensity to not secure the room immediately created tension.  Like many college freshmen, my daughter had just purchased a new laptop and was worried about losing it as well as some of her other valuables because far too many times she would come back to an unlocked door.

After trying to remedy the situation with her roommate and having no success, she would call us expressing her frustration that the situation was not getting any better. Darla and I decided that our daughter needed a secure storage solution. We realized that any viable solution must:

So, after considering the requirements and the space available, we realized the space above her feet was the only place in her dorm room that could be considered available to use. It was not a shared area, she had full control of this small space, and it was very close to where she would spend lots of time. We also knew it would work on both the top and bottom bunk in the event that her bed location changed.

Thus, the BunkTrunk™ was born.

After a few revisions, driven by our daughter’s experience with early prototypes, we finalized a design that is functional, accessible and secure.

We added a few accessories so she could get the most out of her BunkTrunk™. She needed a power strip with USB outlets for charging her phone, laptop, and other items. We added a dimmable USB light so she wouldn’t bother others when she studied late. We also added a Bluetooth speaker so that she and her roommates could watch movies together.

With her laptop and phone locked up while charging inside, she felt much better about her dorm situation. She also found that, with the door to her BunkTrunk™ opened, it made an impromptu work surface.  Whenever she needed to study late into the night and didn’t want to bother her roommates by studying at her desk with the light on, she was able to study in her bed.

Because she was on the top bunk and she didn’t have a nightstand next to her, she used her BunkTrunk™ as a nightstand too!

After we solved her dorm problem, we soon realized that she was not alone in her desire to secure her valuables. Other college students could also benefit from the BunkTrunk™. What started in 2015 as a simple answer to our daughter’s need evolved into a family business, selling BunkTrunk™’s to over 20 colleges in the Summer of 2016. And the growth hasn’t stopped there.

It turns out that the saying is true, necessity really is the mother of invention, and, in our case, it led to a new small business too!

Check out bunktrunk.com for more information.