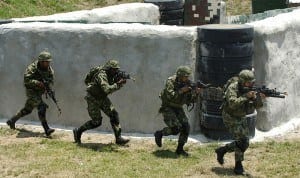 Many Concerned Over JH15 Exercise

What is Operation Jade Helm 15? Set to begin in the Southwestern United States, Jade Helm is said to be a drill to see how Special Operations Forces from our four branches can handle, and conduct, a hostile take-over scenario, with regards to world-wide U.S. interests. The problem is that it is on U.S. soil, and many U.S. residents are left to believe that there is something more going on.

Army spokesperson Lt. Col. Mark Lastoria told the Washington Post that, “The nature of warfare is always changing and U.S. Army Special Operations Command’s mission is to make certain the Army’s various Special Operations Forces are trained, equipped and organized to successfully conduct worldwide special operations in support of our nation’s interests,” and that, “Training exercise Jade Helm is going to assist our Special Operations Soldiers and leadership in refining the skills needed against an ever changing foreign threat.”

However, many people believe that there is a darker side to this exercise. On Twitter user tweeted, “”While we’re obsessing about the Walking Dead, Martial Law is coming to fruition in the US,” and some have brought up the recently-reported closures of Wal-Mart super stores in Texas, as being suspicious. Wal-Mart has addressed these concerns by stating that they are fixing ongoing plumbing problems within these stores and that is all. Conspiracy theories have evolved over the last few weeks, claiming that the U.S. is rehearsing for the enactment of martial law across the nation, a belief that has come from the creation of The National Defense Authorization Act (NDAA), which allows the detainment of U.S. citizens for an indefinite period on the mere suspicion of involvement with terrorist activities. The Patriot Act, which was brought forth with little disclosure is different from the NDAA, which was enacted in relative secret.

The operation is to begin in mid-July through September 15th, and will be conducted throughout California, Colorado, Texas, Utah, Arizona, New Mexico, and Nevada. The realistic military training or RMT, is designed to ensure proper coordination between Department of Defense representatives and local and regional authorities. The process includes the following measures: