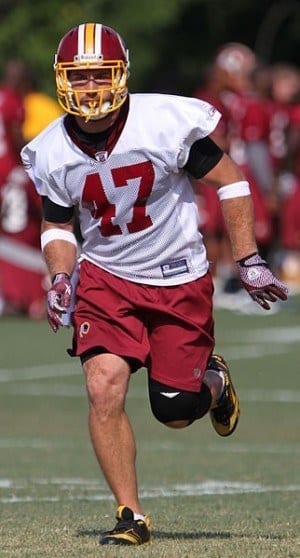 Cooley is on his own with only one preseason game left

Chris Cooley was released Tuesday by the Washington Redskins, a team the tight-end has been with since entering the league in 2004. According to the Redskins, Cooley was not fit for them to be a starter.

Cooley, on the other hand, thinks otherwise.

The two-time pro bowl tight-end feels that he is fit to be a starter, but having been replaced in his starting role by second-round 2008 draft pick Fred Davis leaves Cooley with no other option but to leave Washington, the home he has known for the last eight years.

Cooley has struggled with injuries in the last few years, but in 2010—the tight-end’s most efficient and recently healthy year—Cooley totaled 849 yards with 77 catches, but only 3 touchdowns.

News of Cooley’s departure from Washington comes as a bit of a shock to Redskins fans, stirring up mixed emotions. Most of them have been negative.

A debate on Washington Post writer LaVar Arrington’s radio show displayed the scorn of Redskins fans toward Cooley’s leaving. The debate showed that many fans had turned their backs on a dedicated player who gave the team, the city and the fans nothing but loyalty and hard work for eight seasons.

So why the harsh turn of perceptions? After all, the NFL is a business, and to the players it is a job. Can Cooley really be blamed for believing in himself and wanting to start when he knows he is capable of doing so somewhere else? Perhaps Cooley will get the adoration and respect he is looking for and deserves elsewhere.

Though there is only one preseason game left before the NFL season kicks into high gear, there is still time to make room for a hard-working fan favorite tight-end for anyone that needs one.